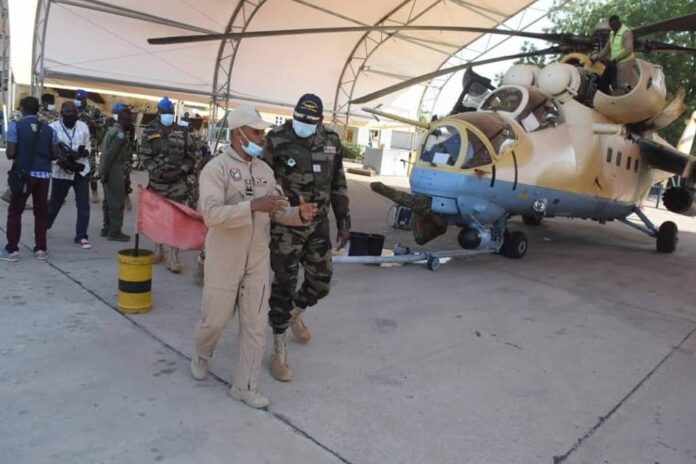 The Chief of Air Staff (CAS), Nigerien Air Force, Colonel Amirou Abdulkader, has commended the Air Task Force (ATF) of Operation Lafiya Dole for the successes recorded so far in its renewed offensive operations against Boko Haram Terrorists (BHTs) and Islamic State of West Africa Province (ISWAP) elements in the North East of the Country.

The Nigerien CAS gave the commendation yesterday while addressing personnel of the ATF during his visit to Nigerian Air Force (NAF) operational Units in Maiduguri to enhance collaboration in the conduct of air operations in support of the ongoing Counter-Insurgency (COIN) operations in the Lake Chad Basin area. Colonel Abdulkader, who earlier visited some NAF units in Kaduna, stated that he was pleased with the level of cooperation between the 2 air forces as well as the opportunities he had observed that could help further build capacity of the Nigerien Air Force.

While conveying the appreciation of the entire Nigerien Air Force family to the ATF for its relentless efforts in the fight against insurgency, the Nigerien CAS, who was received in Maiduguri by the NAF Chief of Training and Operations, Air Vice Marshal (AVM) James Gwani, noted that operations being conducted have been very fruitful in further destabilizing the BHTs’ new leadership and curtailing their freedom of action within the Theatre. He however urged the ATF to sustain the onslaught in order to ensure total defeat of the terrorists.

He also appreciated personnel of the ATF for their sacrifices and dedication towards ensuring that there is relative peace in Nigeria and the entire Lake Chad Basin, while expressing readiness to further improve synergy between both forces.

The ATF Commander, Air Commodore Abubakar Abdulkadir, had earlier briefed the Nigerien CAS on the successes recorded so far in different operations conducted within the Theatre. He mentioned that the synergy between Nigeria and Niger Republic has been very effective towards the maintenance of peace and security in the Region.

In a related development, the Nigerien CAS had earlier visited some Units at the NAF Base Kaduna to assess areas of collaboration between the two air forces.

The Units visited include 401 Flying Training School (401 FTS), Regiment Training Centre (RTC) and the Air Force Institute of Technology (AFIT). At 401 FTS, Colonel Amirou was briefed on the activities of the Unit which was followed by a tour of facilities of the School.

While at the RTC, the Nigerien CAS was treated to a demonstration by the NAF Special Forces on their capabilities in fast roping, insertion and extraction, counterterrorism offensive and medical evacuation during fierce battle, amongst others.

Colonel Abdulkader also visited the AFIT, where the Commandant, AVM Abdulganiyu Olabisi, along with other senior officers of the Institute, gave him detailed briefing on training opportunities for engineers and technicians, amongst other professions, whilst also conducting him on a tour of the Institute’s facilities.