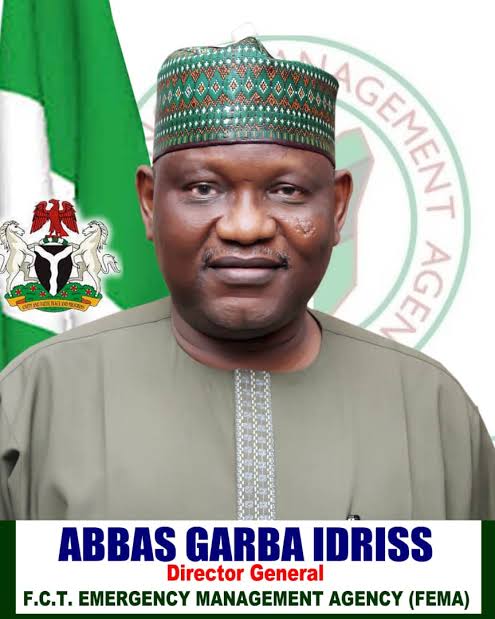 In the wake of the impact-based forecast issued by the Nigerian Meteorological Agency (NIMET), anticipating heavy rainfall in the FCT and its neighbouring States, the FCT Emergency Management Agency, (FEMA) has activated all stakeholders to ensure the protection of lives and property.

The Director General of FEMA, Alhaji Abbas Idriss, who disclosed this yesterday, in a statement from Head, FEMA’s Public Affairs, Nkechi Isa, said to mitigate the impact of the anticipated heavy rains, the Agency has put all its community divers, local committee Vanguard and key stakeholders on red alert.

Idriss explained that the forecast anticipates heavy rainfall over parts of the FCT, Niger, Nasarawa and Kaduna States between the 26th and 28th of July 2022.

According to him, the forecast predicted that rains are expected to be predominantly intermittent with isolated thunderstorms, flash flooding of roads, low-lying settlements and river channels.

He added that all community divers, volunteers and vanguards have been issued modern rescue equipment including branded raincoats, water jackets, life buoys, reflective jackets, personal protective wears and mobile breathing apparatus as well as the provision of Closed User Group,(CUG) and communication gadgets to enhance their operations.

“Other measures put in place include the collapse of the existing shift duty of rescuers to intensify surveillance for a prompt response during the period.

“FEMA has also barricaded the exit and entrance into the Dogongada community in Lokogoma District, which is always vulnerable to flooding.

“FEMA has erected a standby duty post for FEMA rescue team for the community local vanguard by the River bank at Dogongada”, he stated.

The FEMA boss appealed to FCT residents to desist from the following during the rains; avoid low-lying terrains, avoid standing under trees and unsecured structures, do not drive through running water and switch off electrical appliances before and not during the rains to avoid electrical shocks.

Idriss reiterated the commitment of FEMA to the protection of lives and property in the FCT.

He also urged residents to call the 112 toll-free emergency number in the event of an emergency.