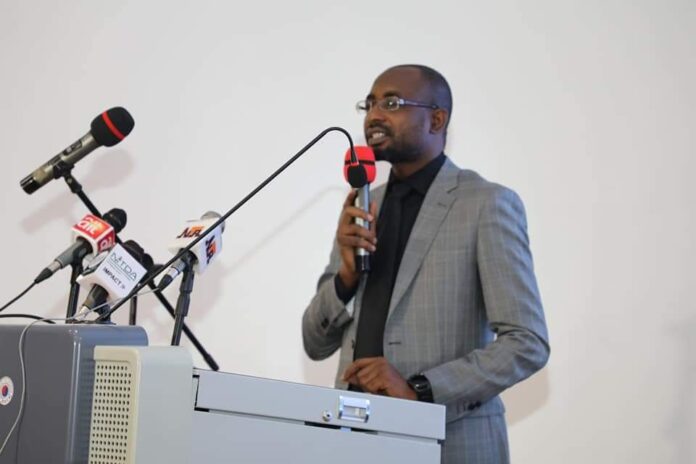 National Information Technology Development Agency (NITDA) has mobilised stakeholders from across public and private sectors of the economy to brainstorm on the adoption strategy for the deployment of Blockchain Technology in Nigeria.

The stakeholders engagement for the review of the National Blockchain Adoption Strategy Framework was held at the eGovernment Training Centre (eGTC), Public Institute of Nigeria (PSIN), Thursday in Abuja.

Blockchain is a database which is distributed, transparent, secured, immutable and capable of adding $1.76trillion to the global Gross Domestic Product (GDP) in the next 10years.

Giving his Special Remarks at the event, the Director General/CEO, NITDA, Kashifu Inuwa said, blockchain as emerging technology is where the future is, therefore, Nigeria must be prepared to benefit from the $1.76billion the technology would offer.

Inuwa informed that the blockchain would produce the next generation of Billionaires, consequently, Nigerians and Nigeria as a country wouldn’t want to be left behind.

“The emerging technology is where the future is. That is where the next generation of Billionaires are going to come from. Or maybe the present Billionaires are already from that area, that is why everybody is trying to control it. So Nigeria as a country also, would not want to be left behind. We want to be part of the people that will benefit from the $1.76billion technology.

“That is why we are here today to brainstorm and come up with an adoption strategy. And I expect to see at the end of this workshop, a strategy that can be easily translated and flexible for execution. We want to come up with something we can implement together. For you the private sector to capture the value and for the government also to direct on it to create jobs and wealth for our country,” he said.

The DG said, “PwC report, projected that blockchain will add $1.76trillion to the global GDP in the next 10years. And they identified five (5) Application areas:

“Firstly, Tracking and Tracing of products and services, the application is going to capture the largest share of that $1.76trillion. The report projected that by 2030, that sector will be valued at $962billion.

“Secondly, they talked about payment and financial services, including using cross border settlement and remittances to promote financial inclusion, and this sector is going to be valued at $423billion.

“Thirdly, Digital Identity, including personal identity, Certificates and Credentials Identity to avoid fraud and identity theft, this area is going to be valued at $224billion.

“Fourthly, Contract and Dispute Resolution, that is where the application of smart contract is adopted, and that one was projected to be valued around $73billion by 2030.”

The NITDA boss said, “it was about customer engagement where you can use the blockchain application for loyalty and other things, and this
area will be valued at about $54billion. So as a country, we need to look at our competitive advantage and see which of those applications we can easily grab values from.”

He is optimistic that the private sector would capture most of the values that would be created from the strategy because of the potentials in blockchain.

The Central Bank of Nigeria (CBN) and Securities and Exchange Comission (SEC) also supported the NITDA process towards the deployment of blockchian in the country.

Recall, the CBN since 2017 has partnered the government agencies to guide the adoption of the blockchain in Nigeria.