The Commandant General, Nigeria Security and Civil Defence Corps, NSCDC, Ahmed Abubakar Audi, has pledged the commitment of the Corps to protect the rights of women and assist in ending violence against women in politics.

He made this known when he paid a courtesy visit to the United Nations (UN) Women Country Representative, Ms. Beatrice Eyong at the UN House in Abuja.

Dr. Audi noted that the Corps had last year, through his initiative, established the Gender unit and launched the Gender Policy Document, to promote the rights of women, as well as to mainstream women into policies and programmes of the Corps at all levels.

According to him, that event “also ushered in my decoration as a “He for She” by the Honorable Minister of Women Affairs, Dame Pauline Tallen, in recognition of our effort to promote women inclusiveness in our service since the beginning of my administration”.

He further added that in order to provide adequate security for school children against kidnapping and prevent school gender based violence, the Corps established a formidable Female Squad that is highly trained to implement the safe school initiative of government.

He therefore appealed for support of the United Nations Women, in the area of training for Gender Desk Officers of the Corps across the nation as well as technical support to aid the prevention of school gender-based violence among others.

In Her Response, the Country Representative of the United Nations Women in Nigeria, Ms. Beatrice Eyong, affirmed that the Corps was keeping up to speed with its mandates, and assured that the UN women will be more than ready to partner with the Corps especially in areas of common interests and concerns. 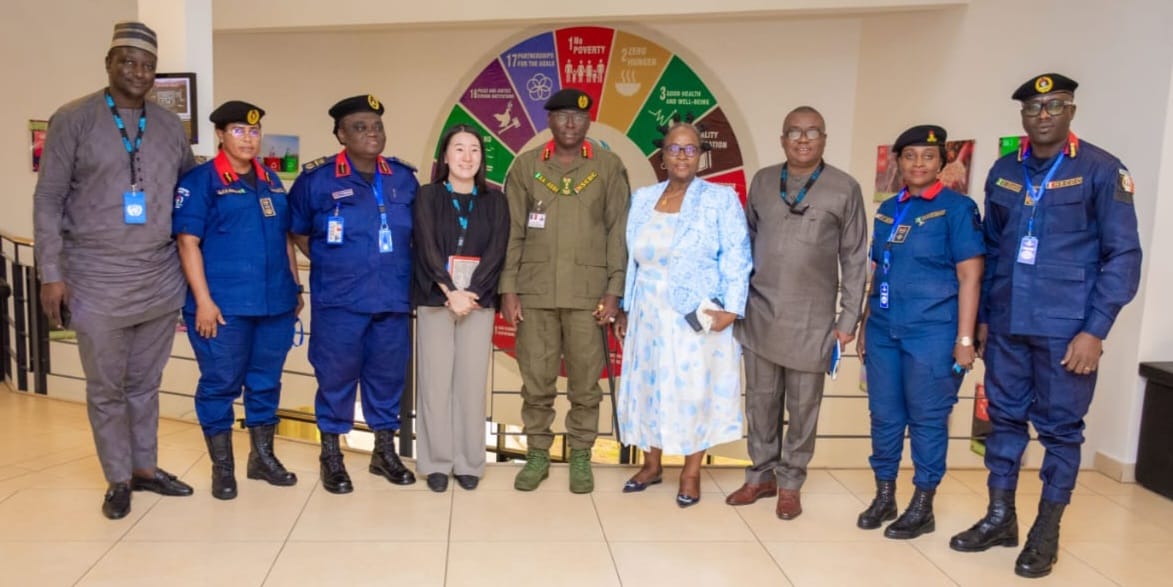 She hinted a soon to be launched Digitally Assisted Climate-Smart Agriculture, as part of their economic empowerment program for rural women and the nation at large, adding that because security was a major factor to be prioritized, there was need for the partnership between the Corps and UN Women to go deeper and stronger.

“We shall expand our partnership with the NSCDC to leverage on the expertise of your Agro Rangers unit to provide security for rural women who are farmers as well as our officials when the program commence”, she explained.

Ms. Beatrice Eyong sought the support of the NSCDC in the prevention of trafficking of women and girls, stating that about 18.5 million children are out of school and over 10 million of such are girls.

In view of the forthcoming general elections in 2023, the Country Representative emphasised that women are vulnerable species that have been constantly denied of their rights to actively participate in politics, and requested for maximum support from the Corps in bringing an end to violence against women in politics.

While promising to put necessary machineries in motion through the gender unit at the National Headquarters to assist in ending violence against women in politics especially as the election year draws closer, the NSCDC boss assured the UN Women body of necessary cooperation and security support anytime the Corps is called upon.

“You can count on us, call on Civil Defence anytime for your programs, our job is to ensure security of live and protection of Critical National Assets and Infrastructure.

“We have justified our existence over the years and we shall continue to work hard until we achieve total security in the country”, Audi said.