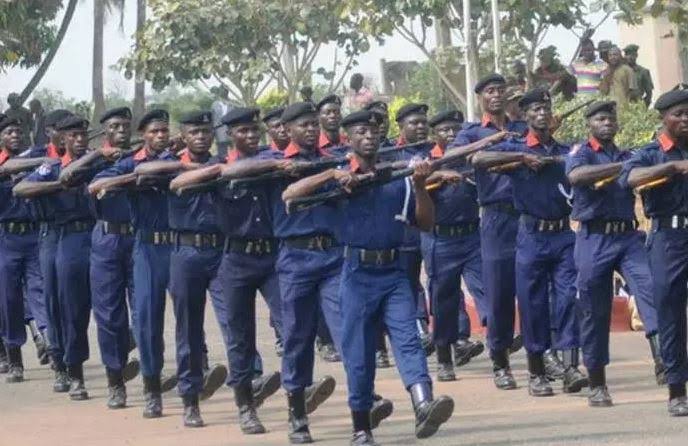 The Nigeria Security and Civil Defence Corps, NSCDC, has sacked 15 and sanctioned 16 of its officers over various offenses.

The disciplinary action was announced by the Commandant General (CG) of the Corps, Dr Ahmed Audi, in a statement signed by the Corps’ spokesman, Olusola Odumosu, on Monday in Abuja.

TheFact Daily learns that 15 of the officers were dismissed, while 7 were suspended, and 9 placed on compulsory retirement. Furthermore, one was interdicted and another demoted.

Audi said that the disciplinary action was approved by the Civil Defence, Corrections, Fire and Immigration Board, CDCFISB, adding that the officers were sanctioned for offences ranging from job racketeering, conspiracy, extortion, forgery, absence without leave, dishonesty and economic sabotage, among others.

“The board also approved the interdiction of an Inspector of Corps (IC) and demotion of one IC,” CG Audi said.

NSCDC boss further said that the disciplinary action was part of measures to rid the service of bad eggs and ensure discipline, adding that it was in line with his resolve to reposition and sanitise the Corps against all forms of negative vices.

“The actions of the erring personnel made it imperative to invoke internal disciplinary mechanism by setting up disciplinary committees.

“They carried out investigation and orderly room trial for various offences and spelt out recommendation of different sanctions to the board for approval,” he said.

While reiterating his determination not to allow errant officers portray the corps in bad light under his leadership, CG Audi said that the sanctions would serve as deterrent to others, as the Corps will not condone any unethical conduct.

He called on all personnel to uphold the Corps’ Standard Operating Procedure, and Code of Ethics, as well as discipline and strict adherence to Public Service Rules.

Audi however promised to reward officers and men who excel in their various assignments as a motivation for good conduct and dedication to service.