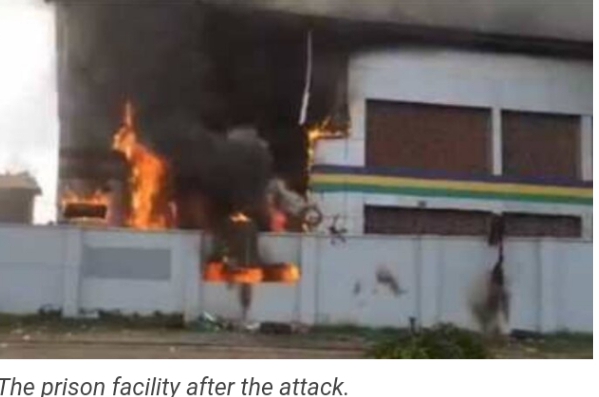 The Controller-General of Corrections, John Mrabure, in the aftermath of the attack on the correctional facility in Owerri, the Imo State capital, has assured that the security of custodial centres in the country remains sacrosanct.

The CG’s assurances were conveyed via a statement by the Public Relations Officer of the Imo State Police Command, Francis Enobore.

TheFact Nigeria reports that the Owerri Custodial Centre was, in the early hours of today, attacked by unknown gunmen with, who stormed the facility with heavy munitions, gained entrance into it by using explosives to blast the administrative block, and forcefully released a total of 1,844 inmates in custody.

According to Enobore, the attackers were said to have arrived the centre in their large number in several Hilux pick-up vans and Sienna Buses armed with sophisticated weapons and immediately engaged the security personnel on duty in a fierce gun battle.

“They eventually detonated the explosive to gain entrance,” he said.

CG Mrabure has since ordered a comprehensive investigation into the incident and in collaboration with other security organisations, commenced a search and recover operation to recapture the fleeing inmates.

Enobore also disclosed that the CG has “equally directed all officers attached to custodial facilities to remain vigilant at this trying moment in our history”.

“As at the last count, 6 inmates have so far voluntarily returned to the facility while 35 inmates refused to escape from custody during the attack”, he stated.

Nigeria At 60: President Buhari To Address Nigerians Via Broadcast – Presidency

The Christian Association of Nigeria (CAN) has commiserated with the Sultan of Sokoto, His Eminence Muhammadu Sa'ad Abubakar III and the people of Sokoto...

Popular Nigerian singer, Paul Okoye of the defunct Psquare music group has shared his encounter with some of the members of the Police Force...

As part of measures to guarantee the safety of passengers along the Abuja - Kaduna rail corridor, the federal government has indicated plans to...

Nollywood actress, Mercy Johnson has denied inviting thugs to beat up one of her daughter's teachers in school. The star actress had earlier flared up...

The Federal Government has called on Insurance Brokers in the country to adopt relevant technologies for robust and all-inclusive market. Minister of Finance, Budget and...