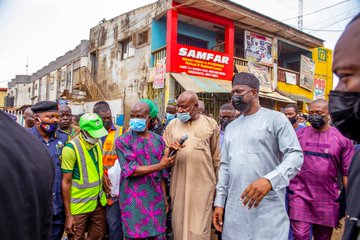 The Governor’s visit early Monday came less than three days after a . after the fire incident

Having inspected the market alongside top government functionaries, Governor Makinde expressed shock and sadness over the loss of goods amounting to millions of naira.

He said he would hold a meeting with leaders of the market to find common grounds on ways of resolving the travails of the market.

The Governor assured the affected traders that he would meet with their leaders to discuss immediate palliatives that can be provided to them.

He also guaranteed a possible relocation of the market to a bigger space to prevent a recurrence of what happened.

As retweeted by @OfficialPDPNg on its official Twitter handle,

This morning, we visited the Araromi Auto Spare Parts Market, Agodi-Gate, Ibadan, to assess the level of damage caused by the fire incident in the early hours of Saturday morning.

“I assured the affected traders that we would meet with their representatives to discuss immediate palliatives that can be provided to them, and possible relocation of the market to a bigger space to prevent a recurrence of what happened.”

The recent fire incident occured even as the Oyo State Government was working towards the completion of Akesan Market in Oyo Town which got burnt a year ago.