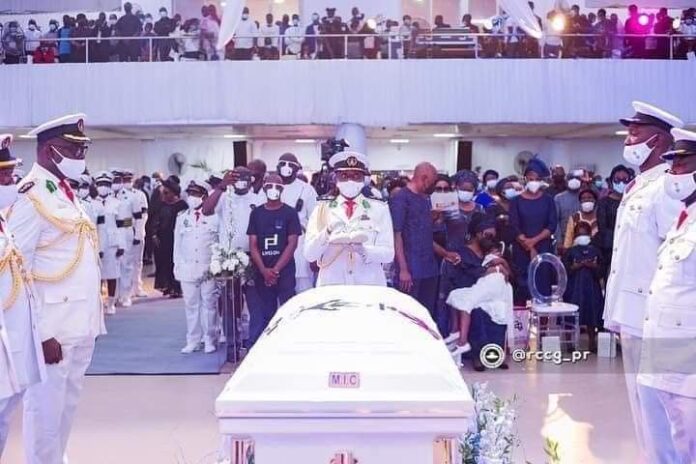 The body of Pastor Dare Adeboye, has been laid to rest amid tears and emotions.

The 42 year old was buried on Tuesday at a farewell service at the  Youth Centre, Redemption Camp, Along Lagos- Ibadan Expressway.

TheFact Nigeria Recalled that Pastor Dare, the third child of the General Overseer of the Redeemed Christian Church of God (RCCG), Pastor Enoch Adeboye died in his sleep last week in Eket, Akwa Ibom State, where he was based with his family.

Until his death, he was the assistant pastor in charge of region (youth) 35.

On Monday night, Temiloluwa Adeboye his widow, had during a night of tribute for her late husband   said,  the deceased was not afraid of death, and that she was sure the late cleric was in heaven.

According to Temiloluwa, her husband told her before his death that if he died, he knew he was fulfilled because he had done what the Lord asked him to do.

She said, “Pastor Dare, my husband, was a wonderful man. He was amazing in every way. I do not mourn him at all. I wept because he left me.

“My husband slept, he did not die and I know, I am sure, because on the resurrection morning, he will rise again and we will see him in glory,” she said.

Days Of Rivalry Between Security Agencies Are Over – CIS, Kano State