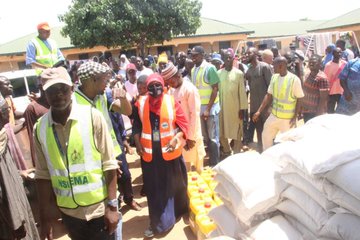 The National Emergency Management Agency, (NEMA) has said that the agency commenced direct distribution of relief materials for persons affected by banditry in Niger State.

The distribution was carried out as approved by President Muhammadu Buhari.

NEMA and the Niger State Emergency Management Agency had earlier conducted a joint assessment of the situation.

This information was obtained from the official Twitter handle of the National Emergency Management Agency, @nemanigeria.

According to news reports, about 400 persons have been killed, 80 abducted and N79 million Naira paid as ransom since the onset of banditry in Niger State, some seven years ago.

Residents have had to flee their homes, flooding the Internally Displaced Persons (IDPs) camps where they face shortages of food, water and sanitary conditions.

18 out of the 25 Local Government Areas in the state such as Shiroro, Mashegu, Rafi, Muryan and Paiko  have been attacked and almost overrun by  bandits.

DPR, NAPIMS To Address Oil And Gas Stakeholders At NIPS2021