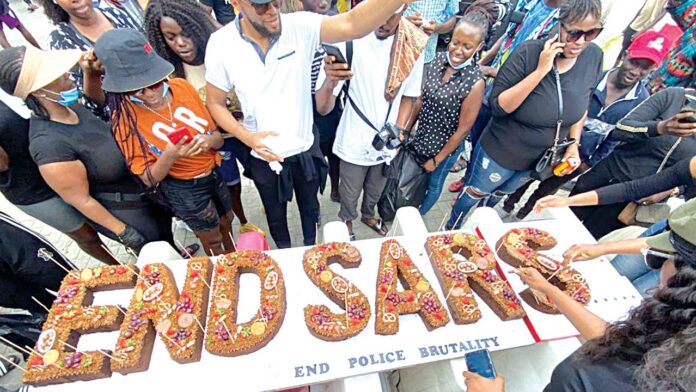 The Lagos State Commissioner of Police (CP), Hakeem Odumosu, has alerted the general public on the purported #OccupyLekkiTollGate protest slated for Saturday, saying it is perceived by the police as a calculated attempt to cause pandemonium and brouhaha and massive destruction of lives and property.

At a news conference in Lagos on Thursday, Odumosu declared the planned protest banned, adding that security forces have been deployed to dislodge any violent protest or gathering. He warned that the security forces would descend heavily on violators.

TheFact Nigeria gathered that the planned protest is staged to demand justice for victims of a shooting during peaceful demonstrations in Lagos last year, who were demanding the dissolution of a notorious police unit long accused of abuses. The youth-led rallies against police brutality brought Nigeria’s largest city to a standstill in October, in a campaign that swiftly widened to include demands about better governance. The #EndSARS protests, named after the police force, spread even after it disbanded and the government promised reforms.

Odumosu said that organising any protest in furtherance of the recent violent and destructive EndSARS protest would be counterproductive to the ongoing series of inquiries and investigations into many cases related to the EndSARS violence and the present security situation of the state,

Lagos State and spread same to other parts of the country, tactically and spontaneously, like the recent violence.

“Premised on the available intelligence and due threat analyses carried out on the planned protest… such will not be allowed in Lagos State,” he warned.

He said Lagos State, its people and the Nigerian nation at large were still reeling from the aftermath of the last EndSARS violence that left many lives and properties lost, as such, it is not reasonable to allow same to repeat itself in the state.

He said that more importantly, the prevailing Covid19 virus which is rampaging in the country, should be another urgent reason to disallow large gathering, recalling that four days ago, the Federal Government Task Force on Covid-19 declared that the country now has 13 variants of Covid-19 virus which makes it more deadly.

“With this development, all hands must be on deck to halt the spread of the virus by self-complying with its protocols major which is maintenance social distance. In addition, the judgement pronounced on the reopening of the Lekki Toll Gate plaza has been misconceptualized by the EndSARS agitators,” he added.

The Lagos CP said further that the Panel of inquiry on EndSARS violence in the State had taken drastic steps to forward reports to the state government on the payment of compensations to affected individuals that were adjudged victims of Police brutality and excessiveness, and that the government has released some amount of money to take care of these compensations accordingly.

“On this note, the Command therefore warns that, in as much as the Police respects people’s opinions and human rights, no protest will be allowed in any part of the state as the security of lives and properties of the Government and the good people of Lagos State is paramount and not negotiable.

“The Command also warns that adequate arrangement and deployment of security forces to kick against and dislodge any violent protest, gathering and procession in any part of the state has been emplaced. The decision of the command in this regard is in the interest of all and sundry in Lagos and to ensure that the statutory responsibilities of the Nigeria Police Force are not compromised,” he said.

Odumosu appealed to the public, particularly parents and guardians, to discourage and warn their children and wards to ignore any unreasonable call or mobilization for protest or gathering which runs against the existing peace and security situation of the state.

“I wish to also warn that the command will not hesitate to resist any protest and/or gathering with all available resources at its disposal but within the ambit of the law,” he said.

June 12: NANS Suspends Protest Over Fear Of Hijack By Politicians