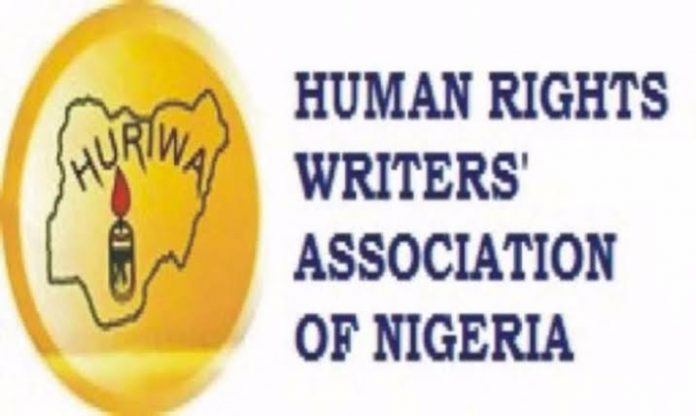 Human Rights Writers Association of Nigeria, (HURIWA), has asked President Muhammadu Buhari to sack all his service chiefs, following the killing of soldiers, policemen and others in Shiroro, Niger State.

The Director-General of the Department of State Services, DSS, the Inspector-General of Police, IGP, and National Security Adviser NSA, for what they consider gross incompetence and for crass dereliction of duty.

TheFact Daily gathered that according to reports, at least 43 people, including 30 soldiers and seven mobile police personnel and civilians were killed when the terrorists stormed the gold mining site. They also abducted several Chinese nationals.

In the statement, HURIWA, said “President Muhammadu Buhari ought to stop his frequent lamentations over his failings in the area of security because that is not why he was elected but to take immediate and comprehensive measures to dismiss any or all of his service chiefs now since they have manifested through their actions and inactions that they have not got what it takes to defeat terrorists just as the security Chiefs most of whom are Moslem Northerners are behaving like they are aiding and abetting the successes recorded so far by Islamic terrorists and the Fulani terrorists.”

The rights group accused President Muhammadu Buhari of abandoning his duty to gallivant and globetrot meaninglessly all over the world.

The Army should cover her face in shame that it is unable to defend the territorial integrity of the Federal Republic of Nigeria even when the defence sector collects the giant allocations every year from the federally released annual budgets,” HURIWA said.

The Association wondered why the Islamists are being allowed to crush a trained and professional Army such as the Nigerian Army, in spite spite of the claims made by government of buying equipment from all over the world, adding that it was certain that there are saboteurs within the Army, moles selling the country out to Jihadists.

The group, therefore, called for the sack of all the service chiefs, asking Nigerians “not to die in silence but to stage protests to demand action from President Muhammadu Buhari to stop the widening insecurity in Nigeria.”

HURIWA said it is unfortunate that Nigerians are letting the government abandon its statutory duty to the citizens by failing to actively protest the heightened state of insecurity in the country and demanding the dismissal of compromised security Chiefs and the National Security Adviser “who has absolutely nothing to offer”.