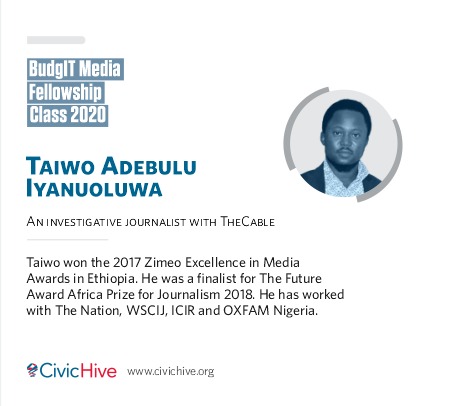 Taiwo Adebulu, an investigative reporter with TheCable, has been named among the six outstanding Nigerian journalists selected for the 2020 BudgIT/Civic Hive Media Fellowship Programme.

Civic Hive, BudgIT’s civic innovation hub, committed to raising civic tech leaders for transforming governance, social issues and creating intersections for civic engagements through technology. The organisation uses an array of tech tools to simplify the budget and matters of public spending for citizens, so as to encourage transparency and accountability in government.

In a statement, Iyanuoluwa Bolarinwa, Civic Hive’s Manager, said journalists with the best resumes and stories were selected from over 285 applicants by a panel of credible judges who are luminaries in the field of journalism.

“This year’s edition will be focused on stories that will advance and drive citizen engagement on transparency, accountability and social issues around Gender Inequality, Health, Agriculture, Social Investment programs and the Extractive Industry,” Bolarinwa said.

The BudgIT/Civic Hive Media Fellowship Program started in the year 2017 and it is aimed at featuring journalists who would drive conversations and applicable thought processes to increase advocacy on budget access, project tracking, social justice, gender equality and anti-corruption, among others. This program has amplified the voices, ideas and data driven stories that have proposed solutions to advocacy issues to create a more egalitarian society that works for all.

Adebulu holds a bachelor degree in Language Arts from Obafemi Awolowo University (OAU) and a master’s degree in Communication Arts Education from the University of Ibadan (UI).

He began his journalism career in 2014 as a freelance reporter with The Nation, Nigeria’s widest circulating newspaper, and joined TheCable in 2018. He writes on social justice, anti-corruption and sustainable development issues that can influence positive changes in Nigeria and the continent.

In 2017, Adebulu was profiled by C. Hub Magazine, a UK-based publication, in its 30 Creative Influencers Under 30 series. He is an alumnus of the British Council/IATC 2017 Young Critics’ Programme. In 2018, he was shortlisted for the Nigeria Media Merit Award (NMMA). Also, he was shortlisted as a finalist for The Future Awards Africa Prize for Journalism 2018.

His story on the plight of children who fish in the Atlantic Ocean to raise their school fees won the sustainable development goals (SDGs) category of the continental 2017 Zimeo Excellence in Media awards in Ethiopia.