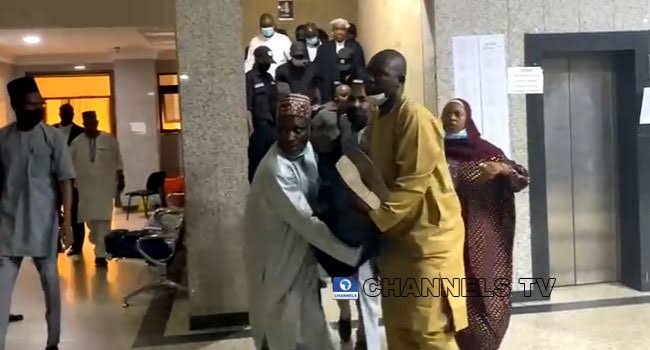 She is said to have fainted soon after her husband, alongside six other persons facing drug trafficking charges, were denied bail by Justice Emeka Nwite.

TheFact Nigeria recalls that the Nigeria Drug Law Enforcement Agency, NDLEA, through its Director, Prosecution and Legal Services, Joseph Sunday, had, on Monday, 7 March, arraigned Kyari, alongside six others, including four suspended officers of IRT, on an eight-count charge. Kyari had pleaded not guilty to the charges, following which the trial was adjourned to March 26.

Furthermore, Kanu Agabi, SAN, who led a delegation of Senior Advocates of Nigeria that appeared for Kyari and another defendant, ACP Joseph Ubia, however informed that a bail application had been filed in respect of his clients.

Joseph Sunday of NDLEA confirmed being served with the bail application, but however added that a counter affidavit had been filed in its opposition.

Mrs. Kyari, wearing a black Hijab, fainted while armed NDLEA operatives were leading Kyari and the others away from the court premises.

She was carried and rushed into one of the offices on the third floor of the court by some officials of the NDLEA and lawyers.

She was said to be asthmatic.