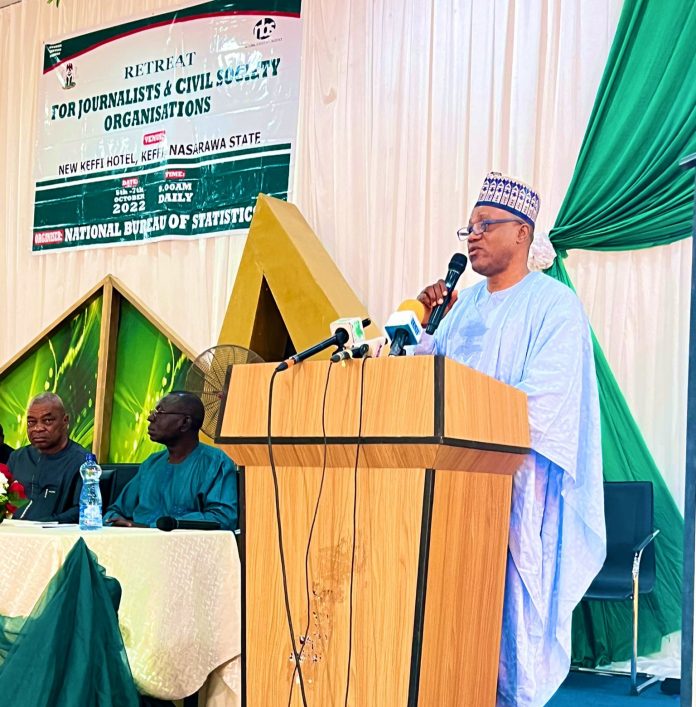 The Statistician-General of the Federation, Prince Adeyemi Adeniran has disclosed that development partners like World Bank, International Monetary Fund (IMF) and others rely fully on the National Bureau of Statistics (NBS) for data.

Prince Adeyemi disclosed this while giving his opening remarks at a 3-Day Retreat for Journalists and Civil Society Organizations currently holding in Keffi, Nasarawa State.

The NBS boss said, “some persons will not believe anything published by NBS simply because it’s a government institution, however, when the same thing is published by the IMF or the World Bank, or any other development partner, they accept it without question, forgetting completely, that those same development partners rely on us fully to produce those indicators”.

He therefore, spoke on the need for the NBS to always remain objective and professionally independent in order to gain the confidence and trust of all users (government, private sector, and the public) in its products and output.

Given the prevailing phenomenon, he said, there was need for the Bureau to work hard to rebuild the public trust.

“It also means, being transparent and opening up our processes to the public, within the limits of what is practically possible, for them to see and understand the workings of our systems.

“In doing so, we can begin to rebuild this confidence and get more of the public on our side, as we continue to fulfil our mandate of accurately and adequately informing the public”, he said.

The Statistician-General charged the participants “to come up with specific plans and methods on how we can jointly build public trust and confidence in official statistics and government figures, so that the policies of government, which is underpinned by the data we disseminate, will have a better chance of making an impact.

“This is very significant even as we go into the season of a general election where a lot of statistics and numbers will be quoted and used to score political points”, he added.

Statistician Adeyemi said, the responsibility on the Bureau, Media and Civil Society Organizations to provide the public with evidence and accurate information should not be treated with levity or laxity, but with utmost seriousness and commitment to the service and progress of the country.

Earlier, the Director, Communication and Public Relations, Mr. Sunday Ichedi said, the retreat brought journalists, Civil Society Organizations, the management of the Bureau and experts together to discuss issues arising from statistical reporting in Nigeria with the aim of avoiding mistakes in the reporting of Statistical data covering all facets of Nigeria’s development to the public.

Mr. Ichedi said, this was important given the fact that Statistics was used by both private, public sectors and individuals in decision making.

He said, “for a credible decision, the information disseminated in the form of data to the general public must be accurate to achieve data guided policy, planning and implementation for national development”.

He therefore, urged the participants to actively participate in the discussions on the topics to technically and operationally improve their knowledge on the issues and by so doing, ensuring fact-based reportage of the NBS data on all areas of Nigeria’s development to the public.