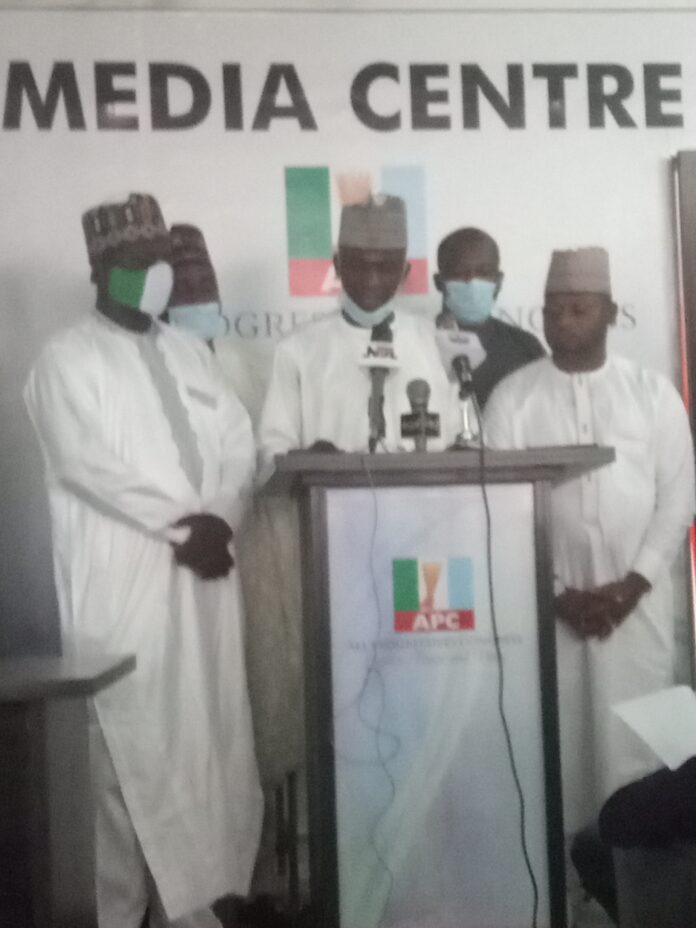 The All Progressive Congress Peace and Unity Forum Zamfara State Chapter has called the attention of the leadership of the party both at the National, Regional and State levels to the clarion call to rescue the party from total banishment from the state.

Speaking yesterday at the APC National Secretariat Abuja, the Chairman of the Forum Salisu Isah Gusau in his speech addressed to the Chairman Careteker committee urgently called on the entire APC leadership to quickly address the crisis and disunity rocking the party and its activities in the state which he described as “cold coup and snatching of power from the party and allocating same to a generally rejected candidate from the opposition”.

Attributing the saga to have started before the party congress in 2018 which produced the current leadership.

“It may interest you to know that, since 1999 till date our great party APP to ANPP to APC has never lost elections in the state and it is not unconnected with the successful leadership succession of the party and ability to resolve any intra-party conflict arising mostly from congresses and conventions. Factions are inevitable in any reasonable party but should be managed effectively so as not to cause more harm than good”.

While seeking for an urgent need to re-awaken and restore the unity of the party, they expressed fear and uncertainty based on the following grounds:

“There were several anti-party activities embarked upon by the persons listed below. There was a video clip quoting Marafa saying, he will destroy the party at the state level since he cannot destroy it at National level. Copies of pictures of Marafa, Wakkala, Yarima and their cohorts with current governor of the state”.

“We realized the action of these unpatriotic members of the party in the state could lead to a situation similar to Sen. Magnus Abe and H.E Rotimi Amaechi in Rivers State as well as case of Imo state where Hon. Uche Nwosu went to court against the party and Hon. Emeka ihedioha was declared victorious. In view of the foregoing, we crave the indulgence of interim National Working Committee (NWC) to investigate this matter to its logical conclusion before its final determination”.

Banditry Will Not End In North If Almajiri Remains Unchecked, CAN Cautions