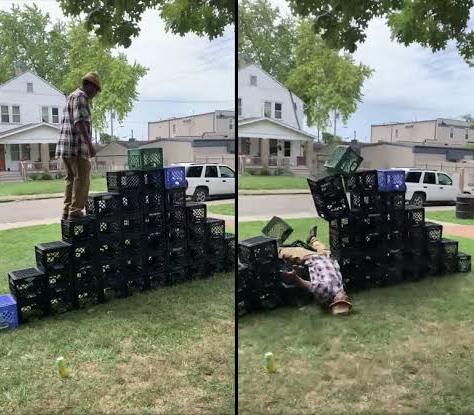 TikTok issued a statement saying that the videos of the crate challenge will not be allowed to be shared by anyone.

The social networking company banned the #cratechallenge game which involves people challenging each other to walk on milk crates.

The risky game initially started in the United States and spread throughout the world with the hashtag #cratechallenge.

In most videos showing the trend, TikTok users are seen tumbling to the ground as they try to climb up one side of the makeshift pyramid and down the other.

The statement says: “TikTok prohibits content that promotes or glorifies dangerous acts, and we remove videos and redirect searches to our Community Guidelines to discourage such content. We encourage everyone to exercise caution in their behaviour whether online or off.”

Healthcare professionals also criticized this game. They stated that the game might lead to paralysis or head injuries.

According to a United States-based doctor, Chad Cannon, the crate challenge could lead to serious injuries.

He said: “You’re at risk of… hitting your head and getting a head bleed. If you land on the milk crate, you will break your back and be paralysed.”

SEC New DG, Yuguda pledges to work with all stakeholders