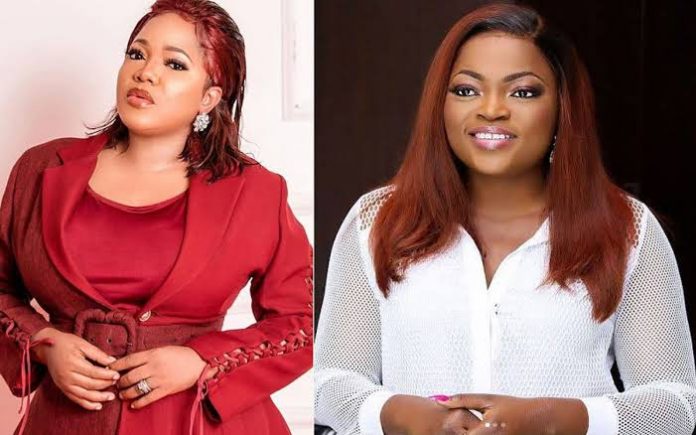 Popular Nollywood actress, Toyin Abraham, has reacted to a viral interview clip where she talked about her relationship with her colleague, Funke Akindele.

Recently, rumors went round claiming the two actresses have not been in good terms ever since Toyin released her latest movie, ‘The Ghost and the Tout too’.

In the short video, Toyin claimed that there was no beef between her and Funke.

She added that Funke “is someone I respect a lot.”

She also indicated that being colleagues does not mean they are close friends as many people think.

“She is my senior colleague and she is someone I respect a lot; so, I do not know what people are talking about, trust me,” she had said in the interview.

“She is one of the few people I look up to. Sometimes, people do not understand that we are colleagues and not family. So, you cannot be talking to all your colleagues. We talk, we follow each other.”

Moments after the interview went viral, netizens concluded that the actress was reacting to the rumour between her and Funke.

However, Toyin on Wednesday via an Instagram post disclosed that the interview was not new as many claimed.

She stated that the radio chat came weeks before she released her latest movie.

She also condemned those circulating the interview, saying that they are “twisting and bending it to suit the narrative of reaction.”

“I just saw an interview I did a few weeks ago with twist and bends to suit narrative of reaction. Some things are better left unsaid. That was my stand then, and now”.

“So, for the avoidance of doubt, the said interview was done before The Ghost and The Tout Too hit the cinema. I am not reacting to anything or throwing anyone under the bus. We look forward, not backward. We move,” she wrote.

Respect Those Who Made It Without Social Media – Yomi Casual