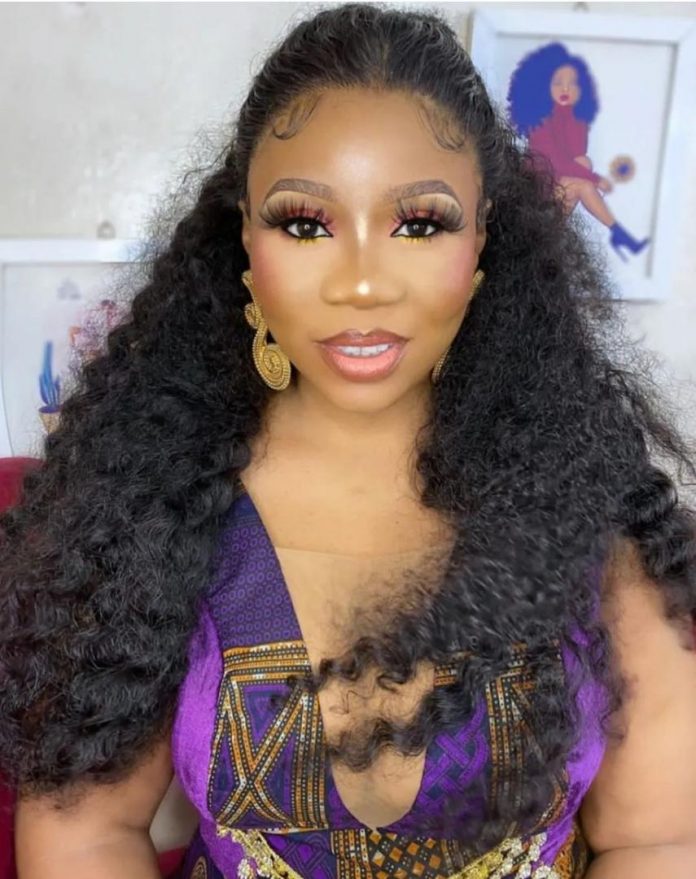 Nollywood actress, Wunmi Toriola has been accused of physically assaulting her son’s nanny on the claims that she drugged her minor son.

The 27-year-old nanny, Motunrayo Azeez, stated that Wunmi beat her and invited soldiers to manhandle her at her home in Medina Estate, Gbagada, Lagos State.

According to reports, the nanny picked up Wunmi’s son from school on Friday, October 15 and took him home.

Azeez claimed that after she fed the young boy on that day, she took him to play outside. She noticed that the boy was running temperature so she gave him some drugs.

Her claims however, did not sound pleasing to Wunmi. Wunmi, who was monitoring the situation with a CCTV device which was connected to her phone accused the nanny of drugging her son. She insisted that the nanny drugged him so that she would be able to press her phone.

“She asked why I gave the baby drugs without her permission and I apologised for that, but she started accusing me of always drugging her son to make him sleep and I told her that yesterday (Friday) was the first time I would give him the drugs: Paracetamol and Vitamin C, with the cough drug she bought.”

“I was surprised about the allegation because I had no reason to drug her son; but she said she did not want to meet at home when she returned. So, I packed my bags and sat at the entrance of the gate outside, but she later called the gateman not to allow me to go out.

“When she came back around 8pm, she started shouting and cursing me. She later said I should enter her car that we were going to a police station. I entered the car because my mind was clean towards her and her son. Instead of driving to the police station, she drove to the estate gate and dropped me with the guards and told them that they must not allow me to go.

“She started beating me at the gate and later carried me back home. When we got home, she ordered that I should be locked inside a room; later, her husband called a soldier, who came to beat me with a horsewhip and used electric shocker on me.”

The nanny pointed out that the actress vowed to lock her up in the house for three weeks to monitor her son’s health.

The actress later released her after her mother begged on her behalf after which she was taken to a police station to write an undertaking.

She added, “After we left the police station, she suddenly parked in the middle of the road and started beating me and dragging my phone that she wanted to seize it. She scattered my clothes on the road; people were just watching us, thinking we were acting a movie. But when they saw that I came outside the car and started crying and begging her, they asked me what happened”.

“She later gave me my phone and drove off. I was packing my clothes from the road with the help of people when I explained what happened to them. They told me to report her to the police; two people followed me to report at the station.

“I didn’t get myself with the beating I received from her and the soldier. I want justice because I only gave her son drugs out of a pure mind.”

Toriola however denied that she physically assaulted Azeez. She said she noticed that her son had sometimes slept for days before and seeing the nanny giving him some undisclosed drugs raised her suspicion.

The actress also said neighbors had reported that the nanny usually beats her son.

Here is Wunmi’s side of the story:

“Apparently, she knew that there was a camera inside, so she would take the boy outside and beat him.

“One week later, I discovered that my son who was active was just sleeping, so catching her on camera giving him drugs raised my suspicion. My son’s cough had gone like two weeks ago, so for her to still be giving him cough drugs without telling me that my son was running a temperature or coughing means she intentionally gave my son the drugs around 6pm so that he could sleep and she could press her phone.

“When I got home, I asked what happened; I didn’t beat her because when I attempted to beat her, she dodged my hand. I called my husband, and he told me not to take any step till he got back. When he came, he called the police to pick her to go and write a statement. But I was the one begging on her behalf that they should not take her away because her people were also begging me.

“I don’t want a case because her mother called me from Epe, begging me to let her go, which I did only for me to now get your message. Now, I’m going to open the case; I’m going to take the case to Panti (SCIID); I have all the evidence of what she did.”