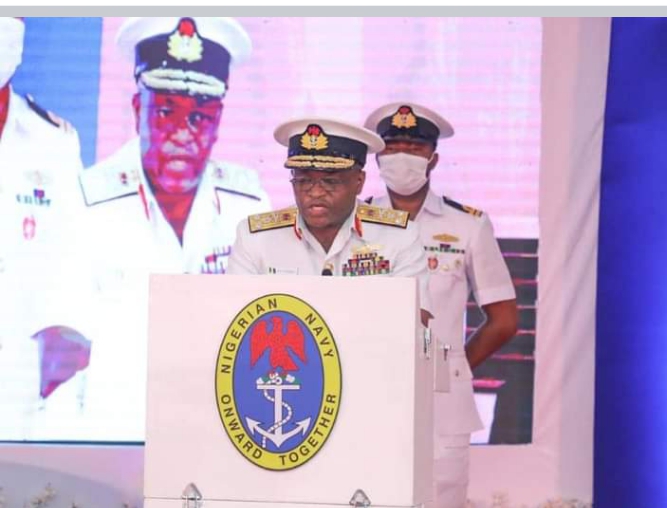 The Chief of the Naval Staff, CNS, Vice Admiral Awwal Zubairu Gambo, has said that the Service had every reason to be proud of the giant strides achieved in reducing illegalities in the Maritime domain.

TheFact Nigeria reports that while delivering his keynote address at the Convention themed “Optimizing Nigerian Navy Operations through Effective Warrant Officers’ Leadership”, the Navy Chief stated that the feedback from the implementation of interesting and far reaching recommendations from the maiden edition of the Convention which was held in 2016, spurred him to sustain the yearly feature of the Warrant Officers Convention on the Nigerian Navy Schedule of Events.

The CNS stated that the Nigerian Navy had every reason to be proud “as our collective efforts have sufficiently reduced illegalities such as; crude oil theft, illegal bunkering, piracy, kidnapping, smuggling, militancy and pipeline vandalism in our maritime domain”.

He said further, that, “It is equally gratifying that we have continued to give a very good account of ourselves in support of the other Services in the ongoing counter-insurgency operations, especially in the North East.

“These successes would not have been possible without an enlightened and professional human resource. The Warrant Officers cadre, play a pivotal role to these successes and it is for their sake we are all gathered here today.”

Vice Admiral Gambo also emphasized the need to collectively strive to build a credible Navy capable of discharging its constitutional roles in a sustainable, efficient and effective manner, which, he said, calls for continuous enlightenment and deliberate re-awakening of the tenets of professionalism and excellent work ethics among naval personnel.

This, among others, he said, is the expectations of what the Convention hopes to achieve as Warrant Officers are expected to be experienced, visible and professionally sound.

The CNS therefore, collective charged Nigerian Navy warrant officers to promote professionalism and effective human resource development in the service, noting they are key players in the lower level of the Nigerian Navy command structure and custodians of unit regimentation. Thus, they are well positioned to instill discipline within the lower chain of command and to maintain naval customs and traditions.

While commending the Federal Government’s continued support to the Nigerian Navy, Admiral Gambo stated that the President Commander-in-Chief of the Armed Forces of the Federal Republic of Nigeria, His Excellency, President Muhammadu Buhari, had pledged his total support to “our Armed Forces in its current campaign to restore the territorial integrity of our nation”.

On his part, the CNS urged the participants to continue to be loyal, patriotic, diligent and disciplined while promising to judiciously apply all allocated resources as evidenced by the ongoing acquisition of an unprecedented number of boats, aggressive renovation and construction of barracks across the various Nigerian Navy establishments amongst others.

He used the opportunity to once again reiterat his commitment to investing in quality training and education as well as in the motivation and welfare of personnel at all levels.

The two day event is attended by participants drawn from the various naval units and establishments across the country, and avails presenters and discussants carefully drawn from both serving and retired naval personnel the opportunity to proffer needed ideas that would enhance the human resource capacity of the Nigerian Navy as it concerns the Warrant Officers and by extension, the entire body of ratings.