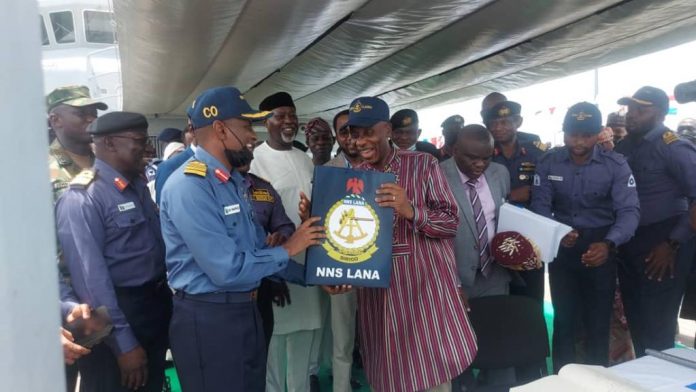 The Minister of Transportation, Rotimi Amaechi has said that the completion of the Indigenous Survey and Charting of Nigeria’s Offshore waters by NNS( Nigerian Navy Ship), LANA would provide over two million jobs and create economic viability of the Ports.

Amaechi said this on Wednesday at the Flag-Off Ceremony of the Indigenous Survey and Charting of Nigeria’s Offshore waters at NNS Beecroft Parade Ground in Lagos.

“It is also expected that at the end of this survey and Charting campaign up to date Indigenous nautical products would be available to facilitate smooth take-off of the new Deep Sea ports that are under construction at various parts of our Offshore areas.

“Additionally, completion of this Survey and Charting operation would equally boost confidence of most mariners to increase patronage of Lagos, Port Harcourt and Calabar ports, just as the Warri, Sapele and other ports that are hitherto operating at lowest level would be re-activated.

“This would provide well over 2million direct and indirect jobs, increase economic viability of those ports and ultimately decongest lagos traffic, as well as reduce pressure on our roads, as more cargo ships would call at the nearest ports to the final destination of the goods and services on-board.”

He said that the NNS LANA was commissioned into the Navy on Dec. 9, 2021 and the vessel would be deployed to systematically Survey Nigeria’s Offshore waters and facilitate production of associated navigational charts and publications to maximise the full potentials of Nigeria’s maritime space.

Amaechi expresses his delight of being part of the historic event, stating that Nigeria’s Offshore and Coastal waters cover a total area of about 84,000 Square nautical miles and about 85 percent of Nigeria’s import and export trades are transported through this maritime domain.