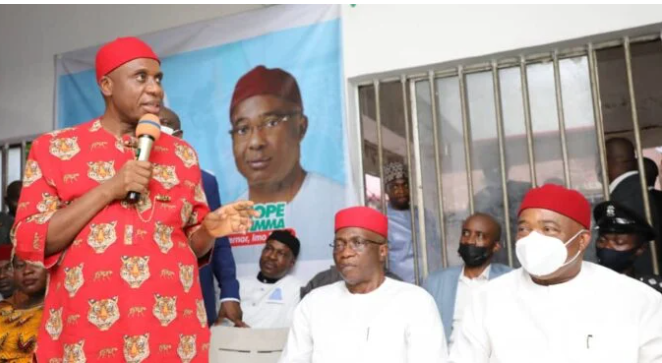 Presidential Aspirant on the platform of the All Progressives Congress (APC), Rotimi Amaechi has met with party delegates from the five South Eastern States to seek their support and votes in the primaries.

TheFact Nigeria noted that Amaechi pledged that if given the opportunity, his experience in dealing with insecurity as Governor of Rivers State, will count in tackling same in the country.

“If you ask ‘why will they support us?’ I’m a young man, a bridge between the young and the old, a son of the soil, and I am approachable.”

“I may be one of the youngest, but I’m the most experienced. As Governor of Rivers State, what you’re currently facing here now, I faced in Port Harcourt, and I dealt with it and overcame it. Be rest assured that if we are given this power, we will overcome this crisis by God’s grace.”

Reiterating that he is not a sectional candidate, but a Nigerian candidate, Amaechi recounted his recommendations for appointments as being spread out to different parts of the country.

“And when I was giving those recommendations, I never thought I would go for presidential consultations, I just felt there was need for balancing, because we are Nigerians, and if you see my team, it’s made of nearly every zone in the country.

The Transportation Minister also assured the people that the ongoing reconstruction of the Port Harcourt-Maiduguri Eastern rail line would have been completed up to Enugu before the end of the year, adding that he included Owerri to the plan, which was not part of the old line.

He further thanked Governor Uzodinma for his support and for bringing the South East delegates together.

“No presidential aspirant will win the primary election or the general elections without the support of the governors, so we are not taking your (Uzodimma) support for granted.

He said, “You will come again by the grace of God, either as an aspirant or as a candidate. One strong message I want to give, is that there is a new spirit in the South East for our great party, we have done all the necessary political engineering. APC in South East is united. APC South East is one.”

“We have two Governors of APC in South East. You must have also heard that our second Governor (David Umahi of Ebonyi State) has also declared interest to be president. But this is a contest between a brother and a brother, and when we enter the bedroom we will resolve it.

“We are determined to win, the message we are giving to Nigerians both members of our party, both those who are not of our party, is that the most important thing for our dear party APC is winnability. We want to win. Why? Because we are already doing well.

“So we cannot afford not to win. Today, APC South East will continue to show Nigerians that we are united. The Governor of Ebonyi would have been here, but because he’s expecting the President in a few days time for a State visit, he is not able to come.

“ However, all the delegates from Ebonyi are here. We don’t have any problem with our brother (Amaechi) who is contesting election, we believe in the unity and the leadership of our party, and God knows that all the indications around, are pointing that we will win.

We Will Make 2billion Vaccines Available To 190 Countries-UNICEF