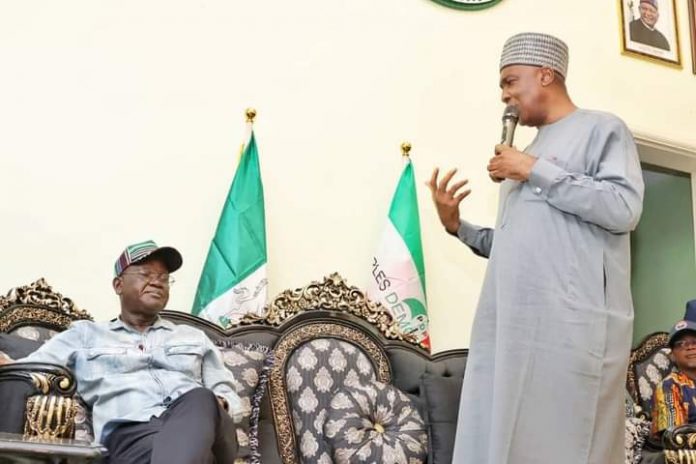 Benue State Governor, Samuel Ortom has assured that the Peoples Democratic Party, PDP, would provide the needed leadership that would take the country out of the socioeconomic pains it is currently passing through in the hands of the APC-led federal government.

The Governor gave the assurance at the weekend when he received former President of the Senate and a PDP presidential aspirant, Senator Bukola Saraki who was in the state to canvass support from delegates ahead of the party’s presidential primaries.

The Chief Press Secretary to the governor, Nathaniel Ikyur in a statement said, Ortom expressed confidence in the ability of Senator Saraki to fix multiple challenges facing the country if given the opportunity.

He described him as a politician who has distinguished himself and is known for defending the cause of justice and fairness.

Governor Ortom commended Saraki for the peaceful manner he has been going about his campaign and urged him to maintain a harmonious working relationship with other presidential aspirants.

The Governor acknowledged how the former President of the Senate always identified with the state in its trying moments, saying he has distinguished himself as a true friend of the state.

Earlier, Senator Saraki recalled that the history of his presidential ambition will be traced to Benue State, saying his declaration journey began in Makurdi the state capital.

He said Nigeria needs a courageous leader that has the capacity to deal with issues, stressing that he will be firm in tackling insecurity and will address the injustices meted out to citizens by the current APC administration.

Saraki maintained that Nigeria is at a defining moment in its history and needed a president that could unite the country, stressing that “Without unity, there cannot be progress.”

While lamenting the insecurity that has engulfed the nation, he pointed out that the next president must be bold and courageous to put an end to it.

He called on the delegates to support him to emerge the party’s presidential candidate, noting that it was high time Nigerians supported someone from the North-Central region to lead the country.

The State Chairman of PDP, Sir John Ngbede who spoke on behalf of the delegates prayed God to grant Senator Saraki success in his aspiration.