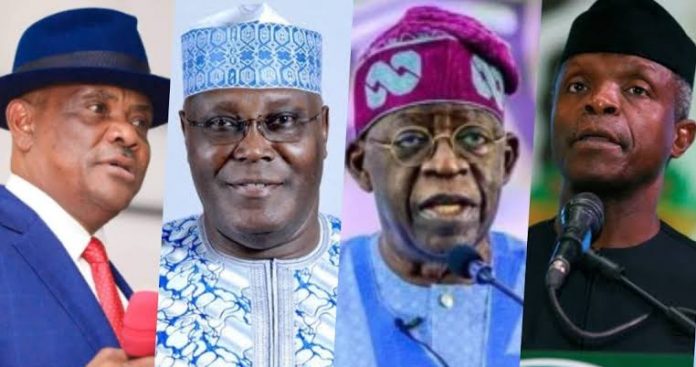 Now that the conventions are over, the flagbearers of Peoples Democratic Party (PDP), Atiku Abubakar and All Progressive Congress (APC) Bola Tinubu are mending walls to avoid mass defection of aggrieved members.

Atiku emerged as the presidential candidate of the opposition party, the Peoples Democratic Party (PDP) at the party’s National Convention in Abuja, with 371 votes.

He defeated the Governor of Rivers State, Nyesom Wike, who scored 237 votes.

The former Nigerian Vice President, noted that the party must remain united to be able to defeat the candidate of the APC at the forthcoming 2023 general elections.

He said: “to unify our country Nigeria, we have to start with bringing every member of the PDP under the covering of the umbrella.

“My visit to former Senate President, Bukola Saraki not long ago underscores this commitment.

“In continuation of my commitment to bring everyone on board in ensuring that the PDP stands as one united party, I visited His Excellency Gov Nyseom Wike at his Abuja residence. This is a continuous process.

“I was also at the residence of Senator Anyim Pius Anyim to pay him a courtesy visit and consult with him on strengthening the cohesion in our great party”, he said.

On Tuesday, Bola Tinubu emerged as the presidential candidate of the APC, with 1271 delegates votes.

While giving his acceptance speech, Tinubu said: “the competition is now over. Those who did not support me, you have nothing to fear. I hold no grudges or grievances.

“Let us each agree to join hands in defeating the PDP and beating back our common foes of poverty, terror and violence. We now have a date with destiny in February 2023. Let us win so Nigeria can become the nation it is intended to be”, he said.

Just yesterday, he paid a surprise visit on the Vice President, Prof. Yemi Osinbajo in continuation of efforts to unite the party’s stalwarts ahead of the general elections.