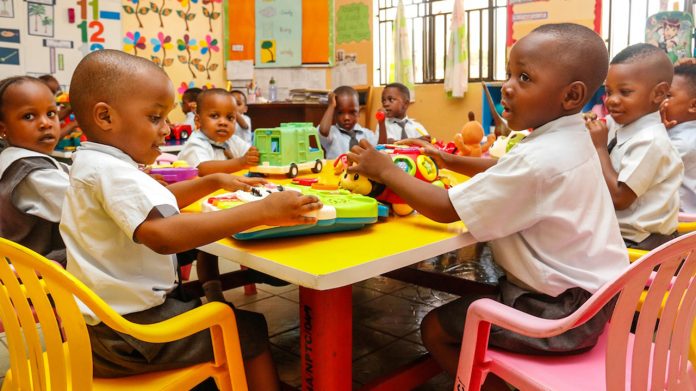 The United Nations Children’s Fund (UNICEF) has said that only 36% of children in Nigeria enroll in Pre-primary (Early Childhood) Education.

Oluwatosin noted that over 1 in 3 children ages 3-4 attend Pre-primary education in the country, while fewer than that attend on a global scale.

She said that quality Early Childhood Education creates improved economic outcome for children in life as the child develops capacity to relate to others, learn and solve problems through it.

According to her, “this policy aims to create an enabling environment for the provision of integrated ECD services and coordination mechanisms among sectors at decentralized levels.

“Nigeria has made some progress in the implementation of this policy. Despite the progress, there are still some challenges which include low awareness and understanding of the importance of ECD, poor articulation and clarity of the policy, weak coordination among the relevant Agencies, and most importantly poor funding”.

Said disclosed that UNICEF considered early childhood as the most rapid and critical period of development in a human life.

She further noted that, although individual children develop at their own pace, all children progress through an identifiable sequence of physical, cognitive, and emotional growth.

She also informed that, “development of the brain in the early years is a pathway that affects physical and mental health, learning, and behavior throughout the life cycle.

“Children who participate in well-conceived ECD programmes tend to be more successful in later school, and are more competent socially & emotionally, as well as show higher verbal, Intellectual and physical development during early childhood than those who are not enrolled into such programme.

“Going by the number of public primary schools, many children are not accessing pre-primary education.

“Therefore, pre-primary education remains a priority in UNICEF programming with Government in Nigeria”.

Lastly, she urged the media to ensure informed reporting to increase awareness of the critical benefits of Play based ECE in Nigeria.

Also, UNICEF Communication Specialist, Dr. Geoffrey Njoku explained that Early Childhood Education was the bedrock of child development and without it, children will not possess the requisite intellectual capacities needed in the future.