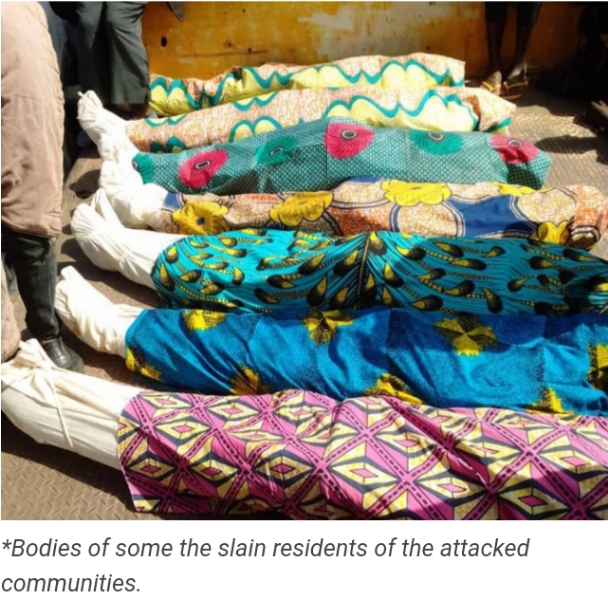 No fewer than nineteen persons were this weekend killed by bandits at Kutemeshi village of Kuyello District in Birnin-Gwari Local Government Area, Kaduna State, a security source has revealed.

The bandits are said to have  invaded the community in Kaduna State, around 5pm on Saturday, and for over two hours which the massacre lasted, the daredevil criminals butchered scores of innocent villagers at the rural community bordering Katsina State, together with Kaya town, and Giwa Local Government of Kaduna State.

TheFact Nigeria gathered from a youth leader in the community, who spoke under condition of anonymity, that the slain villagers were buried amid tears in the early hours of Sunday, and that residents of adjourning communities in Sabuwa town of Katsina State were among those who attended the funeral ceremony, held around 11am today.

The youth leader lamented that thier several calls for security reinforcement did not yeild any results, as only a handful of volunteer-vigilantes came to the  rescue of the community, albeit late – around 7.00 pm, after the bandits had fled into bush.

“In fact, it was today (Sunday) that armed security finally stormed our community,” he emphasized.

He further disclosed that hours after the gruesome raid at Kutemeshi, some group of women besieged the palace of the Birnin-Gwari Emir, protesting the wanton killing of their husbands by bandits in recent times.

He beckoned on both the Federal and State Government to deploy massive security personnel to curb the spate of brutal attacks persistently launched by gunmen at vulnerable communities in Kaduna State.

A security source reports that over 30 communities around Randagi, the Southern part of Birnin-Gwari, have been sacked by bandits, with thousands also displaced in the last 48 hours.

“At the moment, there are five thousand refugees from the affected areas in Birnin-Gwari town”, the source revealed.