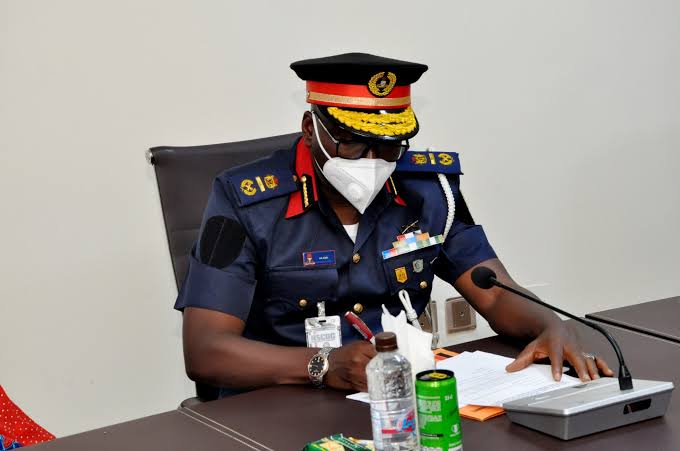 The Commandant General of the Nigerian Security and Civil Defence Corps, NSCDC, Dr. Ahmed Audi, has lamented the nation’s state of insecurity, saying it is pitiable that road travel around the country is now a venture with great risks.

Audi said this today on the occasion of the presentation of operation licences to 17 newly certified Private Guard Operators.

TheFact Nigeria reports that during the presentation, the NSCDC helmsman disclosed that no ess than 50 herdsmen have been arrested across the nation for crimes bordering on kidnapping, banditry and cow rustling, adding that the arrested herdsmen would be made to face the full wrath of the law.

The CG, while lamenting that the nation’s insecurity has reached boiling point, said investigations are still ongoing on the culpability of the herdsmen to some criminal activities and as soon as they are concluded, they will be brought to justice.

He said that the present situation in the country demands the cooperation of all the nation’s military and security apparatus to tackle the insecurity in the nation, and called on all stakeholders in the nation’s security to collaborate,  as no single agency can proffer solutions to the menace in the nation.

In addition to calling on military and security agents to work together in finding lasting solutions to the nation’s insecurity, Dr. Audi pleaded with private security outfits as well as other stakeholders to arrest the ugly tide.

“We have a place in the history together that we must guide jealousy. While it is my duty to ensure utmost performance of the industry, special attention would be paid to the recipients of today, towards ensuring that you perform exceptionally in line with my dream to upbeat the Corps operational activities as well as the private security industry in order to play our expected roles in the face of the present day security challenges,” the CG stated.

He read out the riot act to the operators, warning that a violation of the acts could attract sanctions from the Corps.

“Your license is not transferable and can be revoked if you fail to renew as and when due. You are prohibited from using firearms, but if you have a job that may require the use of arms, our Arms Squad in our State Commands would provide the cover when you liase with the State Commandants.

The NSCDC boss also warned against the use of ranks of any kind, and accoutrement that has semblance to the military or paramilitary is prohibited.

He further said: “No company should engage in the training of guards without the involvement of our State Commands. The biometrics of all your guards must be captured in the PSID platform and the number conspicuously displayed on their uniforms. The first-hand information of any major security breach in a company’s coverage areas must be reported by the company to the Corps to avoid sanctions.

“Guards welfare must be of a priority to companies as we shall not condone non-payment of salaries or termination of appointments of guards who are being owed by the companies.

He noted that the industry is undergoing major reforms and needed the support of security guards in form of advocacy for progress in the efforts to make the industry a more viable one and the pride of everybody.