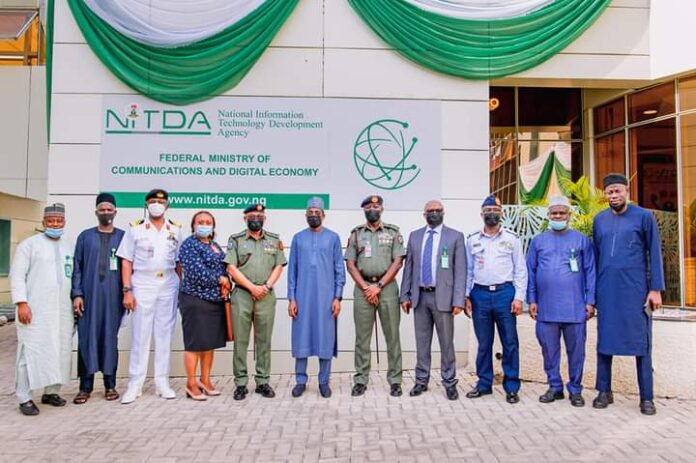 The Director General of the National Information Technology Development Agency (NITDA) Mallam Kashifu Inuwa Abdullahi has said that warfare was no longer physical, therefore imperative for the Nigerian Army to embrace and adopt 21st century military infrastructures and technology in enhancing National Security.

The Director General made this call when he received the Chief of Defence Communications of the Nigerian Army, Major General Elvis Njoku and his team who were at the Corporate headquaters of the Agency to seek collaboration with the aim of improving military operations, Tuesday in Abuja.

Abdullahi said that the collaboration was necessary in addressing the current insecurity challenge faced by the country.

He asserted that it was important for the Nigerian Army to measure up with the global modernized  military infrastructures which would help them in achieving their mandate.

The Director General said that NITDA was established to implement National IT Policy but the Federal Government has recently replaced the policy with the National Digital Economic Policy and Strategy for a Digital Nigeria.

“Digital transformation is about using digital technology to enhance existing traditional processes and using it as a source of inspiration to come up with a new value proposition” the DG noted.

Mallam Abdullahi stated that technology has affected every aspect which includes security.

“It is important to know how to use technology not just as an enabler but a strategic design for your strategy in general which will inspire you to do more” he said.

The Director General said that the data resource of any organization regardless of their size or business activities otherwise known as Ubiquitous data which gives information about everything you want to know and how to use them, Connectivity, in which individuals can connect and communicate with anything such as smart cars, televisions, home appliances and Computing processing power are important parameters that Digital Technology has brought.

“When you talk about Defence and Intelligence, you need to have data, identify the enemy and have a technical know how of targeting them with minimal collateral damage” the DG averred.

The Director General said the Agency’s focus is improving on how things are being done using technology and innovations by creating an enabling environment and an innovation ecosystem which will allow a smooth digitized process.

Mallam Abdullahi stated that innovation does not happen in isolation but rather, with proper alignment and positioning in a relevant ecosytem which necessitates the proposed collaboration between the two parties. The Director General noted that there is cross pollination between the ICT and the Ministry of Defence. “A lot of what started in ICT such as the OODA law; Observe, Orient, Decide and Act originated from defence” the DG said.

Abdullahi stated that apart from the good relationship and collaborations the Agency has with the Nigerian Army, the Nigerian Police Force and other paramilitary agencies in areas of capacity building and cyber security, it is willing to go beyond that and collaborate on more intensive areas. “There is a National problem and we need to collaborate together to identify and solve the problem” he mentioned.

The Director General said that combating National insecurity challenge is a collective responsibility and assured the Major General of the Agency’s support in coming up with solutions, exploring technology to detect improvised explosive devices and exploiting all resources such as use of drones, artificial intelligence and robotics  in ensuring optimal National security.

“Let us work together, develop solutions and as part of our mandates which National Security is priority, see how we can use emerging technologies in helping our great Nation, Nigeria” the DG concluded

The Chief of Defence Communications, Major General Elvis Njoku earlier expressed his gratitude at the warm welcome received by the Agency despite the short notice.

He said that the new Chief of Defence Staff, General Lucky Irabor mandated him to visit all Communications and IT related Government established institutions, collaborate with them with the purpose of tackling the contemporary security challenges.

He said that the use of technology is a force multiplier which will definitely impact positively in the Nigerian Army’s operations and hopes for a possible rich collaboration with NITDA which will help them in achieving their mandate.