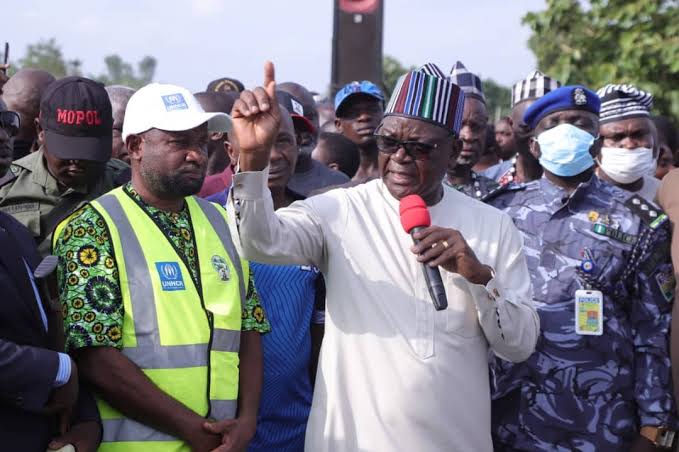 – Nobody, not even Abuja, is safe – Niger gov

Suspected gunmen are reported to have killed seven persons in an Internally Displaced Persons’ (IDP) camp at Abagana in Makurdi, Benue State.

The angry IDPs blocked the Makurdi-Lafia federal highway protesting the killing of thier loved ones whose corpses lay on the streets, and warned that they will take to arms to defend themselves as the killings have now become a shame.

According to them, the herdsmen stormed the camp around midnight, shooting sporadically, an action that left seven persons dead and seven others injured.

Meanwhile, State Governor, Samuel Ortom has called on President Muhammadu Buhari to rise in defense of vulnerable rural farming communities and IDPs or allow them acquire weapons to fight armed herdsmen who have invaded Abagana camp in Makurdi.

Governor Ortom had also asked the president to convene a national security summit to get the true picture of the killings allegedly attributed to bandits.

Meanwhile, in the Northwest, governors in the geo-political zone are working out modalities to end banditry in the region.

Kaduna State Governor, Nasir el-Rufai made this known in Sokoto when he paid a condolence visit to the people and government of Sokoto State over the death of Aisha Dan-Baba, daughter of the Premier of Northern Nigeria, Ahmadu Bello.

“From Sokoto to Zamfara, Katsina to Kaduna, parts of Kebbi State, across to Niger State, our people have been going through trials and tribulations arising from the activities of bandits.

“As governors, we have been meeting, putting our heads together, doing the best we can. The last meeting we had was last Thursday with Mr. President. We expressed our concerns and came up with a credible road map to end banditry in our region once and for all”, el-Rufai said.

Sokoto State Governor, Aminu Tambuwal, emphasized the need for unity and effective collaboration among the leadership of the region irrespective of party affiliations, to end the rising insecurity in the country.

Tambuwal, who confirmed an attack in Kebbi State where a DPO and eight security operatives were killed by bandits, as well as an attack last night in Sokoto State, said the situation “is becoming more and more worrisome.” He called for all hands to be on deck to ensure that the region is free of banditry.

It turns out that the Military is not spared in the spate of killings, as they also recorded casualties in the battle to secure the country. The Nigerian Army, NA, confirms that one if its officers and six soldiers were killed in a counter-insurgency operation in Mainok community in Borno State. Five other solsiers who were injured in an attack on Sunday afternoon have been evacuated to a military medical facility for treatment.

Although the Army did not specifically explain how the security operatives died, there are reports that the soldiers may have been killed during air strikes by the Nigerian Airforce, NAF. The reports say that the Airforce hit the wrong coordinates while targeting Boko Haram insurgents who had attacked the troops. Airforce authorities, however, say they are still investigating the air strikes.

Army’s Director of Public Relations, Brig Gen. Mohammed Yerima, explains that insurgents attacked the soldiers using gun trucks as they made attempts to establish a caliphate in Mainok town.

Niger State in north central Nigeria has also come under attack, causing over three thousand residents in Muya and Shiroro Local Government Areas, LGAs, to flee thier homes and seek shelter at a makeshift camp provided by the state government.

The Niger State Governor, Abubakar Sani-Bello, who visited the residents at the shelter, said that Boko Haram have already taken over Kaure community, where he says they have hoisted thier flag.

“Some communities have been displaced by bandits and Boko Haram elements around Muya and Shiroro Local Government Areas”, Bello said, adding that those whose communities are safe could go back home, “but a vast majority of them have to remain here because thier villages and towns have been taken over by bandits and Boko Haram terrorists. Infact, I just heard that they have already placed thier flags in Kaure, which means they’ve taken over the territory.”

Speaking further, Bello said, “This is what I have been engaging the Federal Government, and unfortunately, it has now gotten to this stage that if care is not taken, nobody, not even Abuja is safe. I hope that with the outcome of these banditry activities, time has come now to see reasons for a very well coordinated military action to take place.

“The Boko Haram elements are trying to use these areas as their home, just like they did in Sambisa. While Sambisa is hundreds of kilometres away from Abuja, Kaure is less than two hours drive to Abuja, so nobody is safe anymore. Not even Abuja is safe”, he stated.

In the Southeast, the strain of attacks on police stations in Imo State has continued, with gunmen launching yet another deadly onslaught on the Okigwe South Police divisional Area Command, and killing five police officers, with one policemen said to be missing.

Imo State has been under the spotlight in recent weeks following unprovoked attacks on the State Police Command and a correctional facility in Owerri, the State capital.

Only few days ago, the country home of the state governor, Hope Uzodimma, was burned down by gunmen who also killed three security operatives.

In Anambra State, government has imposed a 7pm to 6am curfew in Awkuzu and Umunya LGAs among other communities, following the killing of nineteen people in the state when hoodlums invaded the Ukpomachi community.

The State Police authorities say that several other persons were injured in that attack while property and livestock were also destroyed.

Meanwhile, Speaker of the House of Representatives, Mr. Femi Gbajabiamila has disclosed that the legislative arm of government has been holding talks with the President behind closed doors on the security challenges in the county.

At the end of the meeting Mr. Gbajabiamila told State House correspondents that the president is dealing with a very difficult situation, and gave assurances that something is in the works as the legislative will do everything to assist the president reach a consensus on the security challenges.

Gbajabiamila assured that they will be “looking for solutions and getting in touch with Mr. President, who is open to anything and everything that will help us in coming to a resolution in this matter”, he said.