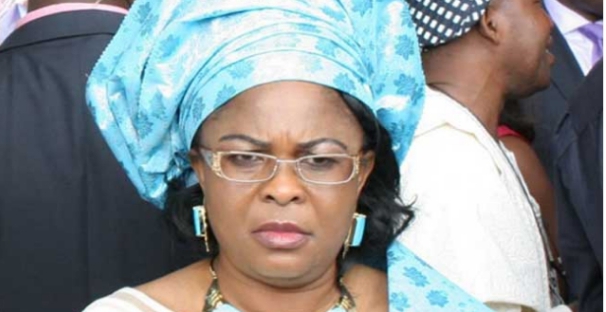 Justice T.G. Ringim of the Federal High Court sitting in Ikoyi, Lagos, has fixed 7 October to hear a motion filed by the Economic and Financial Crimes Commission, EFCC, seeking the final forfeiture of the $5.78million and N2.4billion linked to a former First Lady, Dame Patience Jonathan.

The EFCC had filed an application for the forfeiture of the sums of money warehoused in Skye Bank Plc and Ecobank Plc, respectively in 2017 before Justice Mojisola Olatoregun, who, before her retirement in 2019, had ordered the temporary forfeiture of the money.

TheFact Nigeria reports that the Commission had told Justice Olatoregun that the N2.4billion was found in an Ecobank Nigeria Ltd account in the name of La Wari Furniture and Baths Ltd, the second respondent in the suit. The Commission had further urged the court to order the final forfeiture, because “the $5million dollars was not the first respondent’s (Mrs. Jonathan’s) legitimate earning as a public servant and a salary earner.”

Dissatisfied with the order of the trial court, Dame Jonathan alongside other respondents, LA Wari Furniture and Bathes, had first approached the Court of Appeal and subsequently the Supreme Court to set asise the order of the lower court.

However, both the appellate court and the apex court affirmed the order of Justice Olatoregun.

Consequently, the Chief Judge of the Federal High court, upon Justice Olatoregun’s retirement, re-assigned the matter to Justice Chuka Obiozor for hearing. Justice Obiozor was however trasfered to the Federal High Court, Benin, Edo State, and so could not hear the case.

At the resumed hearing of the matter today, the EFCC counsel, Rotimi Oyedepo, narrated to Justice Ringim how far the matter had gone.

“This matter is a non-conviction suit instituted before your learned brother, Justice Olatoregun now retired, where we prayed for the final forfeiture of the sum of $5,781,173.55, warehoused in Skye Bank Plc and N2,421,953,502.78, property of LA Wari Furniture and Bathes in Ecobank Plc.

“It was instituted and an interim order was granted on April 24, 2017, upon which it went up to Supreme Court and an application for its final forfeiture was moved. But the trial judge didn’t deliver the judgment before retiring.

“It was upon that fact that the file was transferred to the registry, where it was re-assigned to the former judge and subsequently your Lordship.”

Counsel to Patience Jonathan, Ifedayo Adedipe, SAN, and Gboyega Oyewole, SAN, also informed the judge that the case was adjourned for mention because it was coming up for the first time before him.

Counsel to the companies, Mike Ozekhome, SAN, therefore, urged the court to adjourn the case on the premise that it was starting afresh and that he intended to file an application challenging the constitutionality of the entire proceedings.

He prayed the court for a long adjournment to enable him file the said application.

In his response, Oyedepo opposed the application and prayed the court not to grant same, because, according to him, there is a procedure enshrined in Section 17 of the Advanced Fee Fraud and Other Related Offences Act, which the EFCC had complied with except the last step, which is a motion for final forfeiture.

Oyedepo, therefore, invited the judge to look at the proceedings of February 17, 2021, where the former judge adjourned hearing of the motion for final forfeiture till April 13, which could not be held because of the Judiciary Staff Union of Nigeria (JUSUN) strike.

He also prayed that should the court be inclined to grant an adjournment, it should be for the motion of final forfeiture.

In a bench ruling, Justice Ringim held that a proceedings of this nature is a special one and cannot be truncated by any application.

“In my humble opinion, there is a procedure to follow in this type of application, which cannot be truncated.

“The court cannot adjourn the matter because of an application, which is yet to be filed.

“This court will adjourn for the hearing of the motion for final forfeiture that is pending.

“Consequently, the second respondent is, hereby, ordered to file the application, if any, within 14 days from today, and the plaintiff will have one week to respond.

“It will be heard alongside the motion for final forfeiture.”