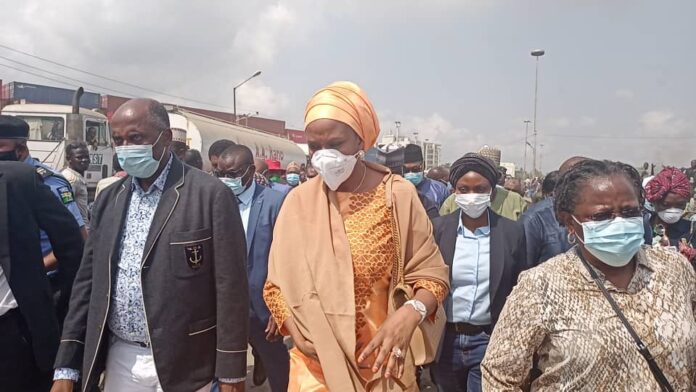 The visit was aimed at fashioning out ways to address the acting congestion at the port.

During the tour, the minister reiterated the need for an urgent solution to end trucks’ blockade of access roads to the ports.

This, he noted, will facilitate timely clearance of goods, with less human contacts.

He, however, said he would meet with all relevant agencies on January 19, 2021, to find a permanent solution to the challenges.

Earlier, the NPA boss, said that by January 2021, an electronic clearing system for cargoes would be introduced that would resolve the issue gridlock at the Port.

She said the NPA was collaborating with the Lagos State government, to create truck parks at designated areas.

This was she added that the Lagos State government plans to give a designated truck park at Orile where trucks will park until their cargo is cleared electronically before they can proceed into the port.

“We are planning to deploy an E-call-up system in January 2021. We will provide an electronic call-up system within the Ports and designation truck parks. No more trucks parking randomly on the road, we are going to have a designated trucks park; when you are called upon you can enter the Port.

“The electronic call-up system will be across all platforms on phones. You can monitor when the consignment arrives and when you have been assigned to pickup your cargo. The E-call up will also remove human intervention and eliminate corrupt practices”, Bala-Usman said.

She said that the only thing that would be needed for clearing is the barcode that would be scanned at the entrance of the port to enable them enter the port.

On his part, Hassan Bello said that everyday the council have tried to proffer temporary solution to the gridlock at the Port.

He said that with the festive period a lot of goods is expected to be imported into the country which calls for urgent actions.