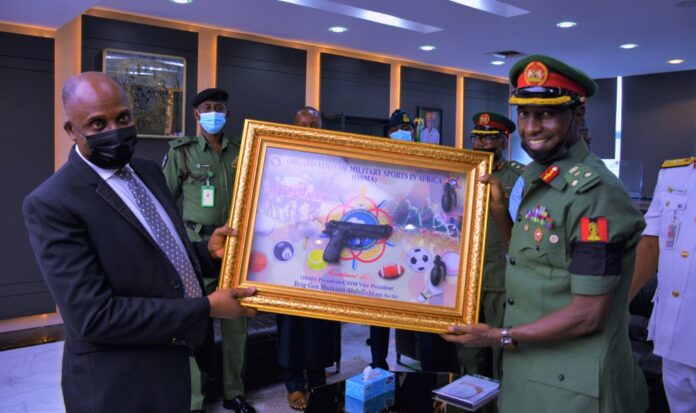 The Minister of Transportation, Rotimi Amaechi, has said he would  support the  International Military Sports in Africa proposed for Sahel Region countries.

The event is expected to promote peace and harmony through Sports.

Amaechi made the  undertaking when a delegation led by the President of Organisation of Military Sports in Africa (OSMA), Brigadier General, Maikano Abdulahi, paid him a courtesy visit in his office in Abuja.

While describing the initiative as Nobel, the minister noted that sports remained a vital tool in the promotion of peace within the region.

Speaking earlier, Abdullahi,  said that the Council is a global institution that is concerned with organizing and coordinating Military sports in the world, which was established on Feb.18, 1948 in France after the World War II.

“CISM is one of the largest multi sports organization in the world. The aim and objective of CISM was to make a major contribution to the prevention and resolution armed forces conflicts in the world through sports”, Abdullahi said

The Conseil International du Sport Militarie (CISM) further disclosed that the organization has 132 member countries stating that Nigeria became a bone-fide member in 1972 and has been very active in all CISM sporting activities ever since.

The Brigadier General, however, stated that the visit was to ask the Ministry for support towards the forthcoming event billed for October in Abuja, describing Amaechi is a man of integrity who fosters peace.

“The purpose of the visit is to acquaint the Honourable Minister with some OSMA programmes and the proposed forthcoming Sahel Region countries sporting for peace to be hosted by Nigeria in October 2021 and to solicit for your supports to move the organization to a greater height.

According to a statement by the assistant director press and public relations, Anastasia Ogbonna, the events for the Sahel Region countries sports for peace include: Football, Marathon and Golf while the countries are Burkina Faso, Cameroun, Tchad, Mali, Niger, Nigeria, Libya and Benin Republic.”

Shehu Sani Warns Against NASS’s Move To Gag The Press