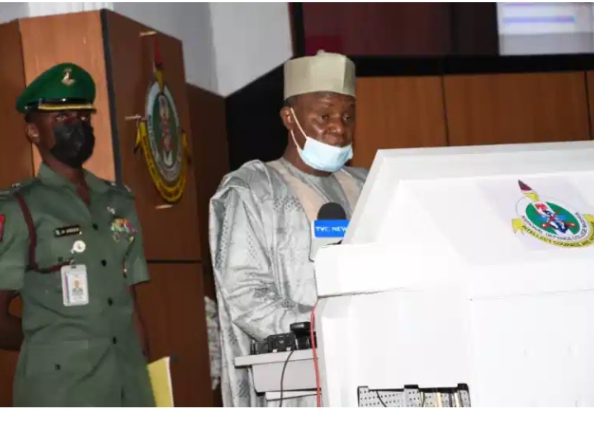 The Minister of Defense, Maj. Gen Bashir Salihi Magashi (rtd), has assured Nigerians that the Federal Government is leveraging the  option of reform of the National Defence architecture to end insecurity in the Country.

General Magashi stated this during the formal presentation of the report of the Committee mandated to facilitate the reform of the Ministry of Defence and the Armed Forces of Nigeria, held at the National Defence College, Abuja.

The Minister said that the reformation of the Armed Forces, which is in line with President Muhammadu Buhari’s intent to emplace a robust, repositioned and result- oriented military sector for improved performance in the discharge of constitional mandate, is expedient especially now that the nation is combating internal security challenges.

While appreciating what he described as the ground breaking patriotic efforts of the Committee, the Defence Minister assured that the recomendations made in the report by the Committee will be painstakingly perused with a view to implementing them courageously for the betterment of all Nigerians.

The Committee Chairman, retired Air Vice Marshal Mohammed Ndatsu Umaru, said the over two hundred and fifty- page report contains over seventy recomendations as well as drawn up strategies to facilitate their implimentation.

He identified key issues in the recommendations relating to policies on recruitment, promotion, retirement, funding and managing military operations as well as the need to accord priority attention to Research and Development, R & D, and restructuring of Defence Industrial Corporation of Nigeria, DICON.

He therefore appealed to the Minister of Defence Maj Gen Magashi to hasten the implimentation of the recommendations and to constitute a high level advisory team for the reform of the Ministry of Defence based on the current Defence Policy.

In their separate remarks the Minister of Interior, Rauf Aregbesola, and the Chief of Defence Staff, General Leo Irabor, lauded the patriotic zeal of the convener of the Committee, Minister of Defence for taking the bull by the horns for the reform and gave kudos to the Committee for turning in the report within the stipulated time frame.

It will be recalled that the 21- man committee was inaugurated by the Minister of Defence in February this year at the Ministry of Defence Headquarters, Abuja with aten- point term of reference contained in the convening order.