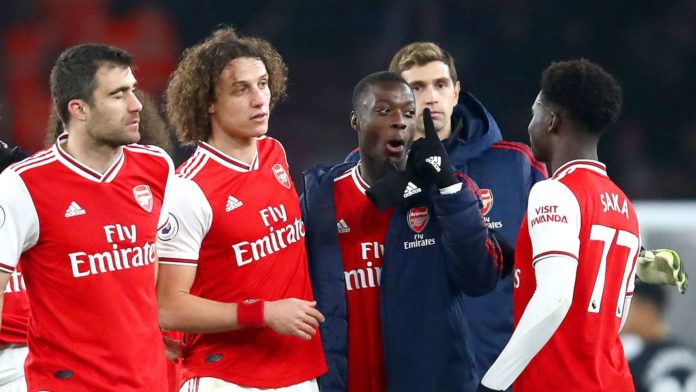 Arsenal’s players have rejected the latest proposal aimed at slashing the club’s wage bill during the ongoing coronavirus crisis.

Executives and players have been attempting to secure some sort of agreement during talks over the past fortnight, which would allow the north London club to lessen their financial outlay while football is suspended in the country.

Several options have been discussed, but so far none have been met with enough approval to be put into action.

The idea of a 12.5 per cent wage cut – which would last for a year – was put to the senior squad over the weekend, with Arsenal making it clear to the players that the financial situation at the club would be grave should the season not be completed or if it were to be finished behind closed doors.

There were incentives included in the offer, including one which stated that the players would be paid in full should they secure Champions League football next season.

Had that offer been accepted, it would have seen Arsenal cut around £25 million ($31m) from their annual £230m ($286m) wage bill. It was, however, met with scepticism by the players with the Gunners currently sitting ninth in the Premier League.

For the proposal to have been given the go-ahead, it would have needed the support of 75% of the players, but it is understood that while some would agree to the cuts, the figure was nowhere near high enough for it to be accepted.

The decision comes after the Professional Footballers’ Association (PFA) advised players to reject all offers of wage cuts during the crisis, insisting that only offers of deferrals should be taken into consideration.

There is an understanding at Arsenal that the players are open to the option of deferring part of their wages to help lessen the financial burden on the club, especially if that would help to keep all non-playing staff in their jobs throughout the shutdown.

But there is a sense of distrust that the ownership may be using the situation as a way to slash a wage bill that has become increasingly problematic following three seasons outside of the Champions League.

Last summer Josh Kroenke – son of owner Stan – responded to growing fan criticism over a lack of action in the transfer market by singling out the issue of player wages.

“It’s no secret that we have a Champions League wage bill on a Europa League budget right now,” he said in a letter obtained by The Press Association. “That’s a fact. And one that we’re figuring out how to face internally at the moment.”

And with Arsenal now facing up to another season in the Europa League – or potentially without European football altogether – that situation is only going to get worse. It has now been magnified further by the Covid-19 pandemic.

With football now suspended, and the potential of remaining fixtures going behind closed doors, Arsenal are facing huge financial losses just a matter of months after they announced an operating loss of £27.1m ($34m) for the year 2018-19. (Goal.com)