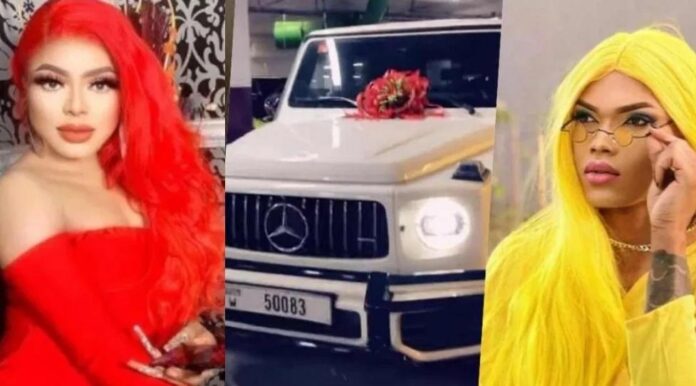 Goldtiful showed off his new G-Wagon ride worth over N150M. The crossdresser claimed that the exotic car was a gift from his sugar daddy.

To publicize his newly acquired car, he took to his Instagram page and wrote;

“Just received the biggest birthday gift..ever I’m so speechless right now,my sugar daddy finally surprised me with car he promised long ago. Not just any car but a G-wagon….I’m still in shock guys…”

However, Bobrisky who doubted the authenticity of the post decided to dig deep to let the truth out which he eventually did.

He debunked the claim by verifying the car plates as he reveals in a video that the vehicle belongs to a rental company.

Sharing the video evidence, he wrote;

“Guys, never let anyone lie to you on social media.

“D first day dis tiny leg of a thing said he bought a gwagoon I knew he was just a clout chaser ( MR CLOUTINO) trying to be me so bad. Don’t swipe o cos you all will go and swear for dis boy.

“How can you go and rent a car and come and claim you bought it on social media, swipe and see all d rent details also impound fee Dubai police is asking d rental too pay on dis white gwagoon 50083.

“And dis he goat said he bought. When anyone lie to you he or she bought any car especially in a civilized country, put the plate number in their system to check d lie go come out. The same way they checked dis plate no for me in  Dubai and sent me all d details.