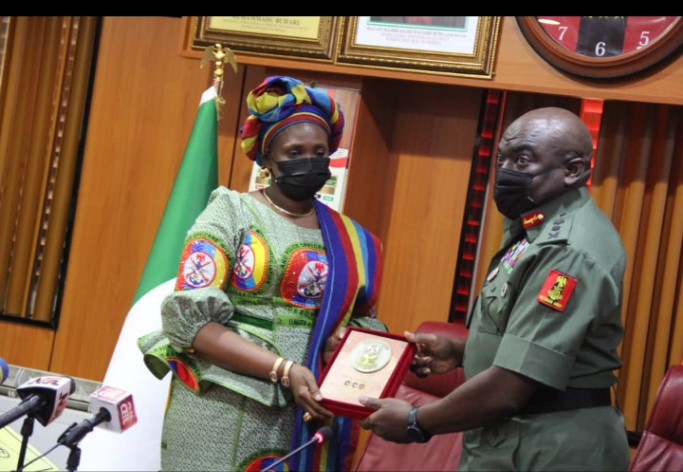 The Chief of Army Staff, COAS, Lieutenant General Ibrahim Attahiru, has assured the Defence and Police Officers’ Wives Association, DEPOWA, of the continuous support of the Nigerian Army, NA, in the execution of its projects and programmes.

Attahiru gave the assurance when the President, DEPOWA, Barrister (Mrs) Victoria Irabor led other members of the association on a courtesy visit to the COAS at the Army Headquarters, Abuja.

The COAS commended the leadership of DEPOWA for championing initiatives that are geared towards ameliorating the problems bordering on healthy living and improved living standards of military personnel.

He noted that the programmes have had direct benefits on military families and the general public, and that the NA would not relent in supporting the laudable humanitarian projects of the association.

Earlier in her remarks, the President of DEPOWA, Mrs Victoria Irabor, maintained that the association had evolved to become an organization focused on providing support to wives of personnel and their families towards achieving a healthy military community.

This, she said, is in line with her pet project tagged “Uniting Our Voices First”.

Barr. Mrs. Irabor further disclosed that DEPOWA was seeking the collaboration of the NA for solutions that would adequately address the causes of Post-Traumatic Stress Disorders, PTSD, faced by personnel.

She asserted that military personnel have over the years suffered physical injuries, depression and emotional trauma accumulated from experiences in the theatres of operations.

She pointing out that traits such as nightmares, anxiety and outbursts of anger are usually triggered in response to trauma and are indicators of PTSD.

The DEPOWA President intimated the COAS on her proposal to establish a PTSD Evaluation and Rehabilitation Centre, to evaluate, counsel and provide adequate support to personnel and their spouses prior to reintegration at the end of their operational tour of duty from the various theatres of operations.

Also present at the event were Principal Staff Officers and Directors from Army Headquarters.

Highlight of the visit was the presentation of souvenir, signing of visitors’ book and a group photograph.