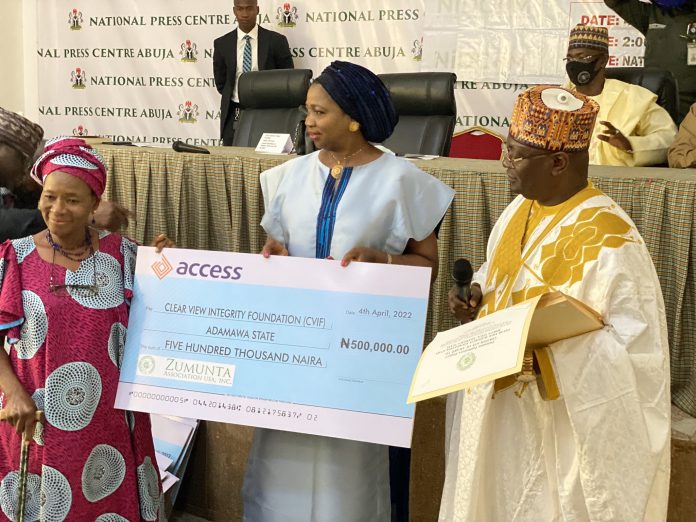 Governor Abdullahi Sule of Nasarawa State says Nigeria as a country can go far where unity and love is top most in the daily affairs of citizens.

The Governor stated this at the Second Phase of the Zumunta Association USA Inc. Benevolent Palliative Project held in Abuja.

The Nasarawa State Governor maintains that it was the love for Nigeria by the Nigerians in the Diaspora USA, especially those from the northern part of the Country that made sacrifices in terms of time and other resources to improve living conditions back home adding that it should not be taken for granted.

Governor Sule, who coincidentally, was a former President of the Association, said he is glad that the succeeding officials have improved upon the legacy of the group in bringing development to the Northern part of the country.

Similarly, the Minister of State, Foreign Affairs,Amb. Zubairu Dada was convinced that the Zumunta Association USA Inc., has shown patriotism and humanitarianism in dedicating selflessly tangible and intangible materials to bring succour to the less privileged, in the Northern Parts of Nigeria.

Amb. Dada said that such acts when emulated, will go a long way to providing the much needed development at the grassroots, sub-national and National levels in Nigeria.

He advised the NGOs to be prudent with the resources and execute the projects in good time and to specifications to inspire more members to support the process.

The Minister added that partnering with the Nigerians in Diaspora Commission (NiDCOM) will be helpful in getting guided steps to pragmatic project deliveries.

For truly being exemplary in line with President Buhari’s three-point agenda, one of which is, never to forget home, by giving back.

A statement signed by Gabriel Odu,
Media, Public Relations and Protocol Unit, NIDCOM, said, the NiDCOM Chairman stated that the Commission is glad to have worked with the group, and wish them well in other future endeavours.

The President of Zumunta Association USA Inc., Mr. Philip Moses stated that the group not only focuses on development in the northern parts of Nigeria, but collaborates with other Nigerian socio-cultural groups for the betterment of the country.

Mr. Moses said that the Association has aided in the areas of Medical missions, Capacity training, Provisions of educational items to tertiary institutions and Scholarships.

He hoped that the singular act will encourage others to help in changing lives for the better and the country as a whole.

Symbolic Palliative Cheques amounting to about Nine million Naira were presented to Eighteen NGOs from 12 Northen States in Nigeria.