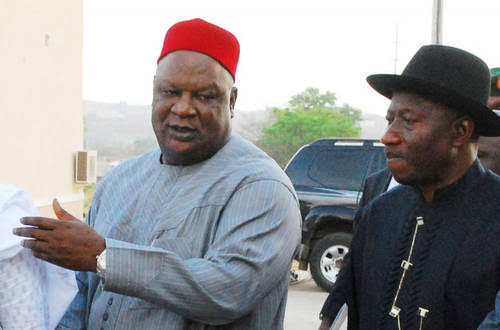 It was encomium galore for former Senate President, Sen. Anyim Pius Anyim on Friday as eminent personalities in Nigeria including former President of Nigeria, Dr. Goodluck Jonathan joined him, his family and loved ones to mark his 60th birthday and extoled his role in the socio-economic and political development of Nigeria.

The low-key 60th birthday party, grandiosely held inside the main living room of Anyim’s residence at Asokoro area of Abuja on Friday, February 19, 20201 got additional spice, becoming a double celebration of Anyim birthday and that of his wife, Chioma, who added another year a day earlier (February 18, 2021).

The decidedly brief event was held in strict compliance with COVID-19 protocols.
Anyim, who thanked God, his family and associates for the show of love, said he considered it appropriate to mark his 60th in appreciation of God for how far he has come, noting, however, that “we decided not to make the birthday a big event, in line with Federal Government’s directive on observance COVID-19 protocol.”

He said his commitment going forward was to use the rest of his life in serving the humanity in whatever capacities God has destined for him within the socioeconomic and political space.

As a lawyer, Anyim has made a mark in his law practice, served at the highest level of governance in the country’s legislative arm as Senate President and later served in the executive arm, as the Secretary to Government of Federation (SGF) under former President Jonathan.

Speaking at the event, Jonathan, who congratulated Anyim for the gift of life to join the league of sexagenarians, described him as “an outstanding statesman and consummate politician.”

Jonathan said he enjoyed a very cordial relationship with Anyim as SGF under his Presidency and “I have so much confidence in him and I am convinced that he is loyal and committed to the success we recorded during my Presidency.”

Former Governor of Edo State, Lucky Igbinedion and his former counterpart from Sokoro, Alh. Attahiru Bafarawa, said Anyim personifies the attitude of a detribalised Nigerian, who did not allow his ethno-religious orientation and political leaning to affect his service to the nation when he held sway as Senator and SGF.

“Despite our different ethnic background, Senator Anyim and I have remained family friends till date, not because of anything but because of his exceptional leadership qualities. I, therefore, wish you many years ahead,” said Bafarawa.

The high point of the event was cutting of many cakes brought by Anyim’s loved ones, the biggest of which was cut by Jonathan, who was joined by other dignitaries and well-wishers in a toss, wishing the celebrants long life, sound health and greater accomplishments in terms of contributing to the country’s socioeconomic and political development.

Also at the event were the Bishop David Abioye of the Living Faith Church Worldwide (Gosehn, Abuja) and a businessman, Stanley Uzo-Chukwu, who described Anyim as a ‘Great motivator to the younger generation.”

The high point of the event was the serial cutting of many cakes brought by Anyim’s loved ones culminating in a toast to long life, sound health and greater accomplishments for the celebrants by Jonathan, who was joined by other dignitaries and well-wishers at the short party.