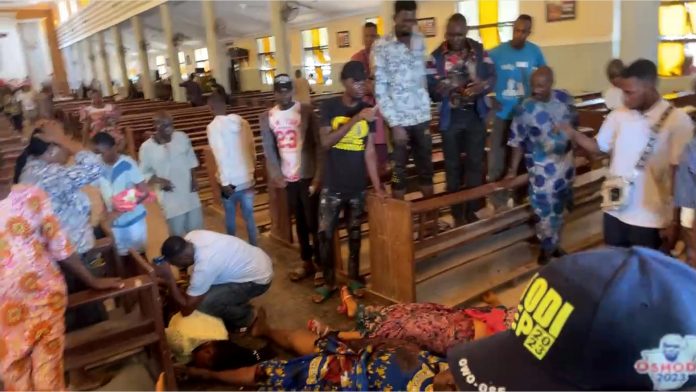 An eye witness account of Pentecost Sunday massacre at St. Francis Xavier Catholic Church at Owo in Ondo State said, over 50 worshippers lost their lives, while several others were injured.

It said, about four gunmen invaded the church after the close of Mass and started shooting sporadically, leaving over 50 dead and several others injured. Although no official figures have been released since the incident happened over 24 hours ago.

In a swift reaction yesterday, President Muhammadu Buhari condemned the heinous killing of the worshippers.

Buhari mourns the dead, condoles with their families, the Catholic Church, and the Government of Ondo State, charging emergency agencies to swing into action, and bring succor to the wounded.

He said, “no matter what, this country shall never give in to evil and wicked people, and darkness will never overcome light. Nigeria will eventually win”.

Also in his reaction, the Ondo State Governor, Akeredolu vowed to hunt down the perpetrators.

“I have received briefs from the Heads of Security agencies in the state. The assailants will be hunted down and they will pay for their crimes.

“I am deeply saddened by the unprovoked attack and killing of innocent people of Owo, worshiping at the St. Francis Catholic Church, Today.

“The vile & satanic attack is a calculated assault on the peace-loving people of Owo Kingdom who have enjoyed relative peace over the years.

“It is a black Sunday in Owo. Our hearts are heavy. Our peace and tranquility have been attacked by the enemies of the people. This is a personal loss, an attack on our dear state.

“I have spoken to the Bishop of the Catholic Diocese of Ondo, Most Reverend Jude Arogundade, who is presently on his way to Owo. Similarly, I have had to cut short my party’s national assignment in Abuja and visit Owo immediately.

“This is an unexpected development. I am shocked to say the least. Nevertheless, We shall commit every available resource to hunt down these assailants and make them pay. We shall never bow to the machinations of heartless elements in our resolves to rid our state of criminals.

“I commiserate with my people in Owo, particularly families of the those who lost their lives to this ugly and unfortunate attack.

“I extend my condolences to Olowo of Owo, Oba Gbadegesin Ogunoye as well as the Catholic Church.

“I urge our people to remain calm and vigilant. Do not take laws into your hands. I have spoken to the heads of the security agencies. I have equally been assured that security operatives would be deployed to monitor and restore normalcy to Owo kingdom”, he said.

He said, “we have stated it very expressly that the Yoruba people need to negotiate their exit from Nigeria as a matter of urgency but our partisan political actors in Yoruba land never took us seriously. We warned them that there was fire on the mountain but we were mocked because of their personal aggrandizement.

“Today, we have all been encircled, most especially, in Lagos. For herdsmen to have the effrontery of bombarding a church in Yoruba land to kill about 85 people shows that we are now in a realistic danger.

“My urgent advice to Governor Akeredolu is to pick up the gauntlet and declare an emergency against the activities of all Fulani herdsmen in the state with immediate effect.

“We have now been taken for granted. We need not pretend anymore. We must demand unanimously, an exit from Nigeria.

“We the Yoruba people cannot live in the same country with characters whose idea of common citizenship in Nigeria is to brutalize, subjugate and even exterminate us. It is time to leave these characters now. All stakeholders – the elites, traditional rulers, our women should act now.

“All the South-West states, including the Yoruba leaders in Kogi and Kwara states should equally declare an emergency against the activities of Fulani herdsmen. We must now take our destinies into our hands.”