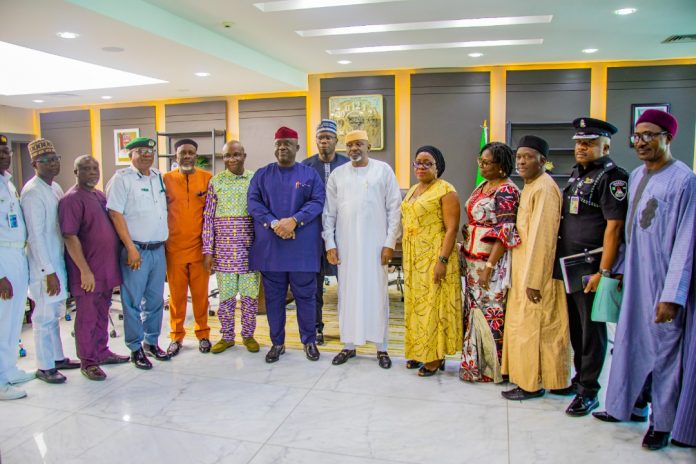 The Minister of Transportation, Mu’azu Sambo, has said, the Federal Government would soon harmonize taxes paid by jetty operators to address double taxation and promote Ease of Doing Business in the country.

Mu’azu disclosed this in a statement by the Director, Press and Public Relations, Eric Ojiekwe on Wednesday in Abuja.

The minister in a meeting with the Technical Sub-Committee of the Presidential Standing Committee on Private Jetties (PSCPJ), led by its Chairman, Engr. Joseph Ororo, noted that operators are more often made to pay multiple registration fees by different regulatory agencies such as the National Inland Waterways and the Nigerian Maritime Administration and Safety Agency.

Speaking on the Committee’s mandate of licensing jetties and closure of illegal platforms, the Minister appreciated their exploits while advising that their inspections should not be restricted to timelines but should include unscheduled visits to jetties to ensure compliance with exant laws and regulations.

Earlier, the Chairman, Technical Sub-Committee on Private jetties, Joseph Ororo informed that the Committee was created in 2004, to checkmate security breaches, economic sabotage, gun-running and other criminal activities which were traced traced private jetties.

According to him, the Technical Sub-Committee is the expert arm of the Presidential Standing Committee on Private Jetties (PSCPJ), adding that prior to the constitution of the Standing Committee, there was a directive shutting down all private jetties across the country due to the intractable illegalities associated with them.

Speaking further, Ororo said the Committee had the following Terms of Reference: “To re-open all jetties deemed vital to the economy of the country as well as to examine all the remaining closed jetties and recommend those to be retained and those to remain permanently closed”.

Others are that: “The Standing Committee meet from time to time to consider applications for operating licence for jetties and recommend those to be issued new licences by the Honourable Minister of Transportation.

Furthermore, Ororo informed that the work of the Sub-Committee has contributed immensely to increased revenue generation for the various regulatory Agencies and the Federal Government as well as bringing about a high level of safety at the respective private jetties.

Similarly, he pointed out that other derivatives from the work of the Committee is that multi-national companies no longer engage jetty facility if such does not possess valid license duty.

He also observed that there is improved relationship between the companies and their host communities due to Cooperate Social Responsibility Projects and job creation made available to them and Nigerians by extension.