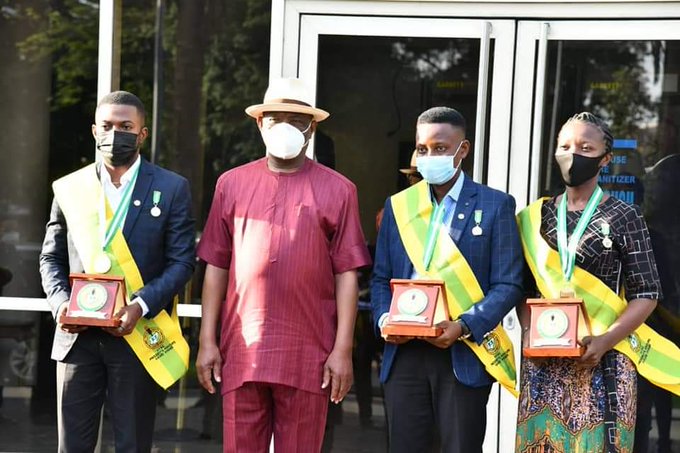 The governor of Rivers State, Mr. Nyesom Wike has offered automatic employment and scholarships up to Masters and Doctor of Philosophy degrees to three indigenes of the state.

The beneficiaries were recipients of the National Youth Service Corps (NYSC) Presidential Honour Award, who had impacted positively on their communities of posting in their service year.

On his official Twitter handle, @GovWike wrote: “This evening, we were delighted to receive three indigenes of the State who through their selflessness became recipients of the National Youth Service Corps (NYSC) Presidential Honour Award.

“Jasper Deebari Uchenna during his national service put up street names and signs on streets in Jigawa State. “Their service to humanity is commendable as they went above and beyond the call of duty to impact society.

“As a result of this, they have been offered employment with the Rivers State Civil Service or scholarships for Masters and Doctor of Philosophy degrees in any University of their choice”.

The National Youth Service Corps, had  shortlisted 110 corps members for the 2021 President’s Honours Award based on their exemplary performance and Community Development Service projects.

Director-General, of NYSC, Brigadier-General Shuaibu Ibrahim, had  said that the awards were meant to encourage diligence among corps members.

Ibrahim said that a national selection committee comprising of eminent Nigerians made a final decision on the 110 award recipients after screening the nominees forwarded by the 36 States and the FCT.

The President’s NYSC Honours Award was instituted in 1974 as a way of encouraging Corps Members to contribute to National development by embarking on Community Development Projects among other activities.

DJ Cuppy Dreams To Take Over UK In 10 Months