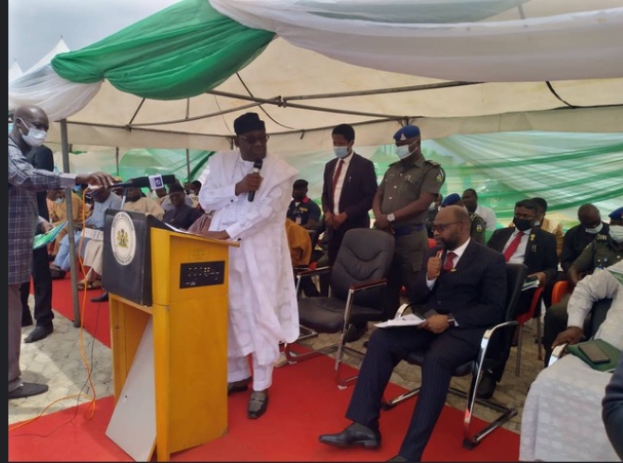 Governor of Adamawa State, Ahmadu Umaru Fintiri, has commended the Independent Corrupt Practices and Other Related Offences Commission, ICPC, for its efforts in helping the State Government recover the sum of N120 million.

Governor Fintiri, who disclosed this at the commissioning of the new Adamawa State Office complex of the ICPC, said, that the sum was recovered from the State’s Commercial Farmers Loans Scheme.

TheFact Nigeria notes that this feat brings to bear the ICPC’s campaign with regards to the promotion of integrity, transparency and accountability.

Fintiri, who was represented by his Deputy, Chief Crowther Seth, noted that the introduction of various governance reforms, particularly, the establishment of Anti-Corruption and Transparency Units in Ministries, Department and Agencies, MDAs, have been playing pivotal roles in ensuring that public officials observe due process in the conduct of government affairs.

The Governor further underscored the partnership between the State and the Commission, which had contributed in no small measure to the realisation of the objectives of the State Government’s programmes and project.

Fintiri charged the ICPC on capacity m building of Adamawa State government officials, especially members of the Anti-corruption Units in MDAs to, not only resist the temptation of being corrupt, but also have a full grasp of the anti-corruption laws and extant regulations to guide their daily official and private transactions.

Earlier in his welcome address, the Chairman of ICPC, Professor Bolaji Owasanoye, expressed his gratitude to the Governor and people of Adamawa State for the generous support towards the Commission.

He stated that ICPC was empowered by law to set up offices in the 36 states of the Federation, adding that the Adamawa State Office was the third prototype-built office structure to be commissioned after Oyo and Sokoto States offices.

The Chairman also revealed that the Adamawa State Office was among the second set of the State Offices that were established by ICPC in 2007 with a few members of Staff in a rented apartment.

According to him, the new office building was “in fulfilment of ICPC’S dream to own its offices in all the States of the Federation”.

According to Owasanoye, the new building is in fulfillment of the promise made by the Commission at a National Anti-Corruption Summit held in February 2018, in the State capital, to complement the effort of Adamawa State in establishing agencies like the Public Procurement Agency and for incorporating the provisions of the ICPC Act in the State’s Penal Code.

Professor Owasanoye further thanked the former Governor of Adamawa State, Vice Admiral Murtala Nyako who had approved the allocation of the plot of land on which the office edifice was constructed to the Commission in 2012.

Also speaking at the event, the Chairman, Senate Committee on Anti-Corruption and Financial Crimes, Senator Suleiman Abdu Kwari, who was represented by Senator Binos Dauda Yaro, thanked the Chairman and the Board for the bold steps of proper utilization of the Commission’s finances and promised to support the Commission in its effort through appropriation and legislative interventions.

In his goodwill message, the Chairman, House of Representative Committee on Anti-Corruption, Garba Shehu (Sarkin Noma) commended the State Governor, the Chairman and Board of ICPC for this remarkable feat.

According to him, the fight against corruption in Adamawa State in particular, and the North-East in general will receive a fresh impetus by the commissioning of the new office as it will provide a conducive environment that will help in delivering the mandate of the Commission.

He further congratulated the Staff of ICPC who will make use of the facility and urge them to reciprocate by being more committed to and productive in their job.

Taking the vote of thanks, the Secretary to the Commission, Professor Musa Usman Abubakar, expressed gratitude to the guests for gracing the occasion, and wished them all a safe trip back to their respective destinations.

ICPC Has No Retention Powers Over Recovered Funds, Assets – Owasanoye