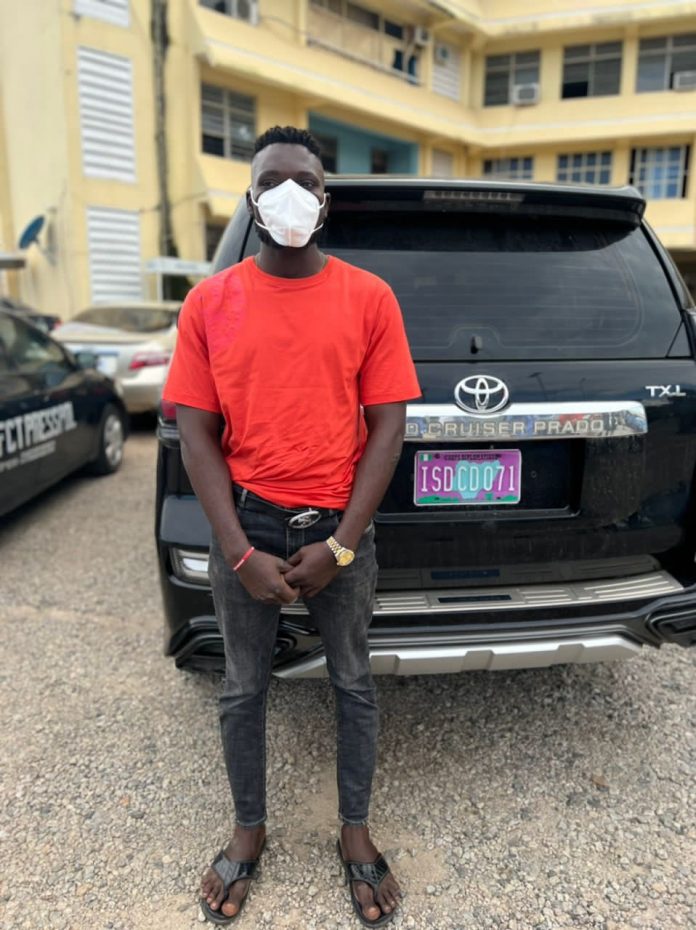 The Federal Capital Territory (FCT) Abuja Police Command have apprehended a suspect and recovered a vehicle stolen at gunpoint, in Maitama District, a highbrow residential area in the nation’s capital.

TheFact Daily learnt that at about 8:00pm on Wednesday, 12, October 2022, a man, while waiting by his car for his female counterpart who had entered into a pharmacy in Maitama, was abducted in the vehicle, a Toyota Landcruiser Jeep with Diplomatic Registration Number GD CD 071, by about 6 armed hoodlums, who arrived in a Mazda vehicle.

A passerby, who attempted to come to the aid of the victim was shot in the head and later confirmed dead at the Maitama District Hospital.

Police Commissioner, FCT Command CP Babaji Sunday, on receiving report of the incident, deployed several Tactical and Intelligence apparatuses, and launched an aggressive manhunt for the miscreants and the recovery of the stolen vehicle.

According to Adeh, “the painstaking effort of the Command yielded results as the vehicle was recovered at Jabi, around Eco Bank Junction, while one Emmanuel Okoi, a 29 year-old male resident of Jabi, and a suspected member of the criminal syndicate was arrested”.

Debriefing the Officers, CP Sunday charged them not to relent until fleeing members of the criminal syndicate are arrested and an end is brought to their criminal enterprise as well as other crime and criminality in the area and the FCT as a whole.

CP Babaji Sunday, while reassuring the capital’s residents of the Command’s unalloyed stance to continually upgrade the security architecture of the Territory to proactively/actively match up and surmount crime in its dynamics, enjoined the general public to go about their lawful businesses without the fear of harassment or molestation of any kind and from any quarters, and to keep vigilance and make prompt rendition of distress calls/complaints through its emergency lines.

Insecurity: IDPs Protest Attack On Benue Camp, Warn To Arm Themselves In Self-defense