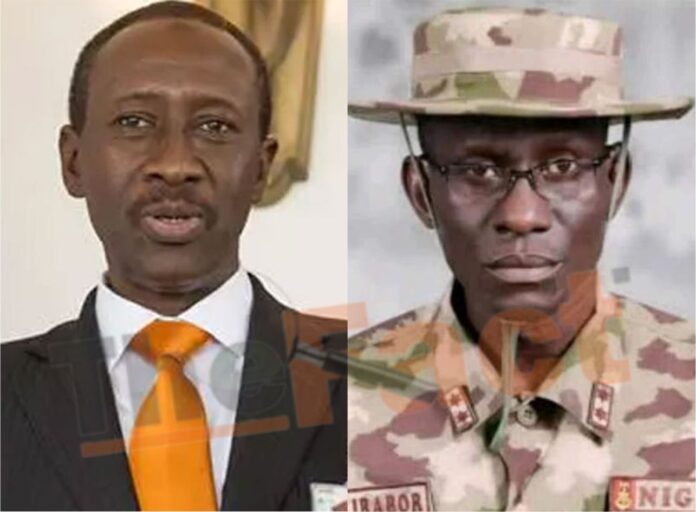 If the statements made by the National Security Adviser (NSA) Maj.-Gen. Babagana Monguno, (rtd), and the Chief of Defence Staff (CDS), Maj.-Gen Lucky Irabor, are anything to go by, Nigerians may, in the very near future, be breathing a sigh of relief from the nightmarish experience, caused by the growing spate of insecurity, that has characterized their existence as citizens in recent times.

The CDS and NSA, yesterday, in Kaduna, rising from a town hall meeting of security chiefs, state governors and other major stakeholders in the north western part of the country, where they discussed the protracted insecurity in the zone, re-echoed their commitment to ending insecurity across the country.

Monguno said that the meeting was aimed at addressing the security concerns bedevilling the area and other parts of the country, adding that similar meetings would be convened in other zones in the bid to find comprehensive, lasting solutions to the security challenges.

He reiterated that President Muhammadu Buhari is worried about the persistent insecurity and emerging threats accompanied by loss of lives all over the country, and, while acknowledging that security is the core responsibility of government, he also stressed that the support of Nigerians at all levels in the society is expedient to bring about a better and safer country.

“What is happening in the North East and North West is worrisome and the president is committed to bringing it to an end.

“I don’t want to believe that we are unable to bring to an end the insecurity in the country, but perhaps we do not have the whim to do that as a people”, he said.

Chief of Defense Staff, Irabor, had  earlier given attestation to  government’s and the service chiefs’ commitment to bringing about lasting peace in the area and the country in general.

“We are assuring you that we are not resting on our oars, as some re-organisation are on the table to change the tide of insecurity in the North West and the country at large,” Irabor said.

He lamented the unscrupulous activities of some traditional and online media that circulate false reports on insecurity, thereby aggravating the already tense situation.

“We are reassuring you that the federal government under the leadership of President Muhammadu Buhari is not relenting on insecurity, and the NSA, service chiefs and other heads of security agencies are working hard to bring to an end to the menace,” Irabor said.