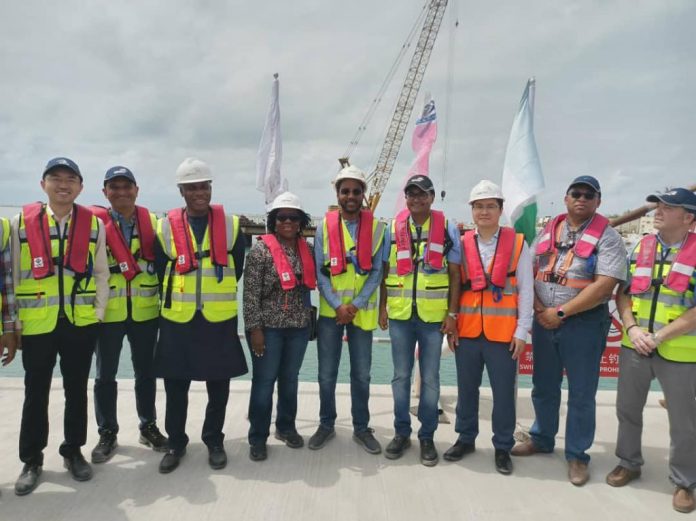 The Minister of Transportation, Rotimi Amaechi, has said that the Lekki Deep Seaport project would contribute about $360 billion to Nigeria’s Gross Domestic Product( GDP), in the next 45 years.

The minister disclosed this on Sunday while inspecting the ongoing multi-million naira project in Lagos.

TheFact Nigeria noted that the former Rivers state governor governor said commercial activities at the seaport will commence in September this year.

According to the minister, “$360 billion. Which sounds much for you but we actually need more of that money to accomplish what we want to achieve. It also depends on how much the economy will grow before then. The growth of the economy will put problem on the expansion.

“The argument we had in cabinet is that the need for Lekki was as a result of the fact that the demand for port activities has exceeded the supply of tinca and Apapa around Lagos. We have more ports than the country needs right now. Because the malfunctioning is a big problem in Nigeria, couple with the fact that this is the first sea port in Nigeria, what we had all these while are river ports , the tincan is a river port the Apapa is a river port and port Harcourt.

“Right here you have 16.5 meters drafts which is good for the country, but the country needs more than just one because of the manufacturing of vessels. We need mote just more than Lagos deep sea port and for me before I leave office I will emphasize on construction of the boni deep sea port.

“As a layman I cannot say the percentage but I can say I am impressed compared with the last time we came here. But there’s huge improvement.

“ But I’m being told by the management by June we will be expecting the cranes by September like we agreed they should commence commercial activities.

“I think we need to talk with Lagos management again, let’s see how to re-orientate them because actually the need for extension will be understated if we ignore it. Now that there are 5,000 persons we need to have the discussion with the community, we need to have a conversion with the Lagos state government and make provisions for their reorientation.

He added that ,”this is a privately funded project, over time they will collect their revenue from the commercial activities before they hand over to the federal government. But obviously taxes will be collected here even them will pay taxes.I doubt there is tax exemption, so we will collect taxes here, bit we must say the confidence in giving them the project is because of the taxes that we collect here that will help in the construction of other projects”.

“But as Minister of Transport I will start from Benin-Port Harcourt then to Calabar it’s only when we have finished that I will start to think of how to come from Benin-Lagos because there’s already a rail from Lagos to Kano. For me what makes it of essence is there are other sea ports around Warri, Calabar, Port Harcourt that need to be fed with rail too.

“Another advice I could give is if they want to invest, they can invest in rail and then the government will either do tax reduction or do something to help them. If we get the 11.1bn as it is, we would probably have to divert the rail, because Lagos-Calabar actually goes into Lagos, we can divert it to come through to Epe and too Lekki here.

Commenting on the latest clip on social media that captured commuters stranded on the Lagos – Ibadan railway, “It’s a bit embarrassing to see what happened. But asking the MD of Railway to explain happened to me, he said that there was a malfunctioning of the gauge so they were misled into thinking that they had enough diesel only to discover that along the line they had to stop because of the malfunctioning that they have fixed.

“But Nigerians, we are human beings are we not? We are bound to make mistakes, the machines are bound to breakdown. Like I told the MD when we they were praising us about Lagos-Ibadan, I said this same people that are praising you, if anything goes bad you will regret it, he said.