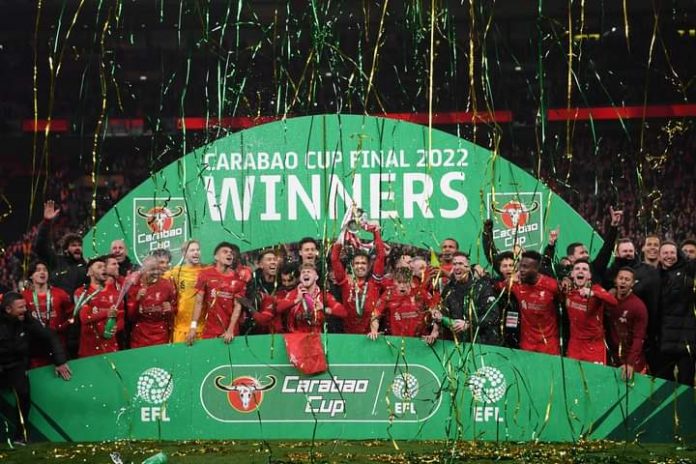 Liverpool won the Carabao Cup final in a dramatic penalty shootout after both team somehow finished goalless after 90 minutes.

Classic Wembley clash saw Sadio Mane have an effort from point-blank range brilliantly saved by Edouard Mendy in the first half of normal time, before Mason Mount went close for Chelsea either side of half-time.

Liverpool were in high expectations of taken the lead only for Joel Matip to have a close range effort ruled out by VAR for a marginal offside against Virgil van Dijk, with Luis Diaz also bringing a smart stop from the African Champion Mendy.

chelsea’s Harvert had a headed goal disallowed, and Mendy saved again from a Van Dijk header from a corner.

Substitute Romelu Lukaku then saw another goal disallowed for a tight offside in extra-time, and then Havertz had yet another in the second period.

The two teams served up a classic fight but couldn’t produced goals in normal time, this was top level football at its finest and Chelsea and Liverpool went toe-to-toe yet again, with the match just as frantic as January’s meeting at Stamford Bridge.

These two used to meet in high stakes matches that were controlled by Jose Mourinho and Rafa Benitez, and while they could also be compelling in their own way, Thomas Tuchel and Jurgen Klopp are a different breed of boss who get their teams to play on the edge.

Chances, horrendous misses and excellent saves came and went, and it made for a classic final despite the lack of (legitimate) goals.

As red smoke swirled around Wembley there didn’t appear to be much wrong with the goal at first, only for Van Dijk’s infringement to be spotted on much, much closer inspection.

You can file it under one of the more marginal VAR offsides, but it was the correct call, which it just about was for Lukaku’s disallowed goal too.

The recent injuries to Diogo Jota and Roberto Firmino have seen Liverpool’s attack shuffled around somewhat, with Mane largely used through the middle of the three.

It was from there that he scored penalty box goals against Norwich and Leeds in the past week, and but for a stunning save from his Senegal teammate and fellow Africa Cup of Nations winner Mendy he would have had another in the first half here.

Mane should have scored but Mendy stretched to his right to keep out the effort after his first save from Naby Keita which left Liverpool man in disbelief.

CAN Congratulates Okonjo-Iweala Over WTO Appointment