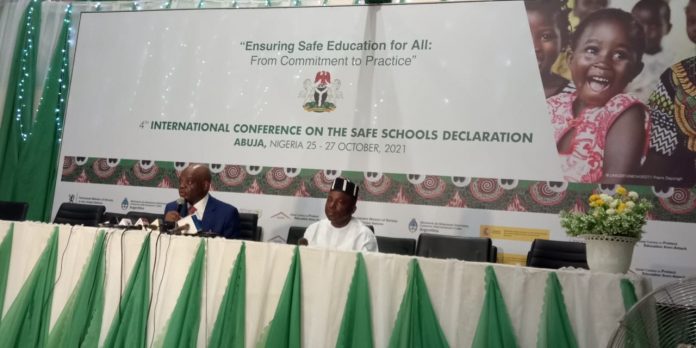 The Minister of Education, Mr. Adamu Adamu has hinted that Nigeria would host this year’s International Conference on Safe Schools Declaration.

TheFact Nigeria reports that some abducted school children are still in captivity.

Meanwhile, the Minister who was represented by the Permanent Secretary, Ministry of Education, Arc. Sonny Echono posited that the Fourth International Conference on the Safe Schools Declaration to be hosted by Nigeria (for the first time), from 25th to 27th October, 2021, in Abuja, Nigeria, seeks to galvanize action to protect education from attack.

The Conference on Safe schools Declaration is a biennial event aimed at taking stock and reviewing progress in implementation of the Safe Schools Declaration (SSD) and the Guidelines for Protecting Schools and Universities from Military Use during Armed Conflict, as well as encouraging commitment and action in protecting education from attack.

The Safe Schools Declaration (SSD) is an inter-governmental political commitment by states to better protect schools and universities, their students and staff, during armed conflict; implement concrete measures to deter security forces from use of schools: make Governments commit to strengthened monitoring and reporting of attacks on education: investigate and prosecute perpetrators of attacks on education and provide assistance to victims.

The Conference would also serve to maintain and amplify momentum of the SSD and its commitment to make safe education for all a reality.

Nigeria would be co-hosting the Conference, with the African Union Commission (AUC), the governments of Argentina, Norway, and Spain, as well as the Global Coalition to Protect Education from Attack (GCPEA.)

The Minister disclosed some of the activities lined up for the conference.

He said: “There will be a dedicated in-person side event for children to express how attacks on education have affected them and an opportunity for them to present their demands for increased involvement in governance, decision-making, and participation in implementing the SSD to safeguard their future.

“The voices of other persons who have been directly impacted by attacks on
education, such as teachers, will also be incorporated into the conference.

“The Nigerian armed forces will explain how they are working to protect education in the North-East of Nigeria where schools are being targeted for attack by non-state armed groups”, he explained.

He further revealed that there would be question and answer sessions. The conference will be virtual as well as physical.

Arc. Sonny said the press briefing was to sensitise the relevant stakeholders about the upcoming conference which is: “Majorly to ensure that we as a country respond in a legal manner to the threat of safety or conflicts that get extended to our schools”, he said.