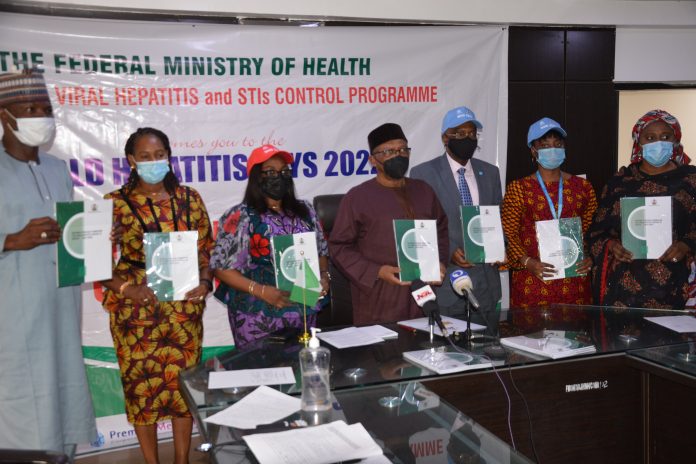 In an apparent move to rid the country of viral hepatitis, the Minister of Health, Dr. Osagie Ehanire has disclosed that the Federal Government was putting measures in place to eliminate the disease within the next eight (8)years.

Ehanire disclosed this at the Ministerial Press Briefing and Launch of the “National Strategic Framework for Viral Hepatitis Control In Nigeria (2022-2026)” on Monday, July 25, 2022 in Abuja.

He noted that viral hepatitis remained a public health threat, especially hepatitis B and C, which cause chronic infection with attendant morbidity and mortality.

The Health Boss lamented that, despite the high rate of infection, there was still low awareness about the disease:

“In Nigeria, nearly 20 million people are estimated to be infected with Hepatitis B or C. Despite significant rates of infection, there is very low awareness about the infection, infections are under-reported, under-diagnosed and under-treated. Stigma and discrimination of those infected also pose challenges.

“The spread of Hepatitis B and C, similar to HIV, is fueled by unsafe sexual behaviour and injection practices, unsafe blood transfusion, harmful practices such as sharing of sharp objects for scarification marks, tattoos etc and Mother-to-Child transmission”, he said.

Ehanire acknowledged that there was the need to do much more than ever before to address the menace. Therefore, in line with this year’s global theme: “BRINGING HEPATITIS CARE CLOSER TO YOU”, the Federal Ministry of Health with support from its partners took concrete steps to ensure that hepatitis care was indeed brought closer to every Nigerian.

The Health Czar who flagged off the National Hepatitis Awareness Campaign themed “BEAT HEPATITIS; Get Tested, Get Treated”, said if the country was to meet its target of eliminating viral hepatitis by 2030, it was expected to put more effort in infant vaccination, prevention of mother-to-child intervention, blood and injection safety, harm reduction, hepatitis diagnosis and treatment.

He therefore, called on all Nigerians to join hands in the effort to eliminate the disease by getting tested.

Citing some of the contributory factors to the high prevalence rate, the WHO Country Representative said:

“There is a lack of awareness among the general populace as evidenced by a low uptake of available preventive services.

“High cost of treatment and out-of-pocket payment are identified impediments for treatment access for people that are aware of their status”.

He however, noted that there had been growing political commitement at country level in recent years, which included, “introduction of hepatitis B Birth dose and the pentavalent (DTP-HepB-Hib) vaccine into routine childhood immunization schedule since 2004.

“Similarly, since 2005, the country has routinely screened all donated and transfused blood and blood products for HBV and HCV and, has institutionalized injection safety and universal precaution since 2007”.

He further commended Nigeria’s response to viral hepatitis by establishing a National Viral Hepatitis Control Programme, Estimating its national prevalence for both HBV and HBC and Developing policies and production of strategic documents such as the National Strategic Framework for Viral Hepatitis (2022-2026).

He also urged the country to mobilize domestic funds for a national hepatitis B and C treatment programme (e.g., scale up and decentralize testing and treatment services to lower-level facilities, primary health and other relevant services including HIV, harm reduction and prison services etc.).

Also speaking, the Country Representative of the United Nations Office on Drugs and Crime (UNODC), Oliver Stolpe who was represented by the National HIV/AIDS Consultant, Uduak Daniel advised that, to effectively eradicate hepatitis and other viral diseases adequate attention should be given to drug addicts, prisoners and other vulnerable people.

“To effectively raise awareness about hepatitis care to communities and individuals, focus on vulnerable and hard-to-reach populations such as people who inject drugs (PWIDs), as well as people in custodial centers and other closed settings is imperative.

“This is because the prevalence of HCV is higher in prisons compared to the general population, and although there is no known published national HCV prevalence study in prisons an independent study conducted in 2020 among 142 people aged 18-50 years in a custodial center in Nigeria showed a HCV prevalence of 29.6%.