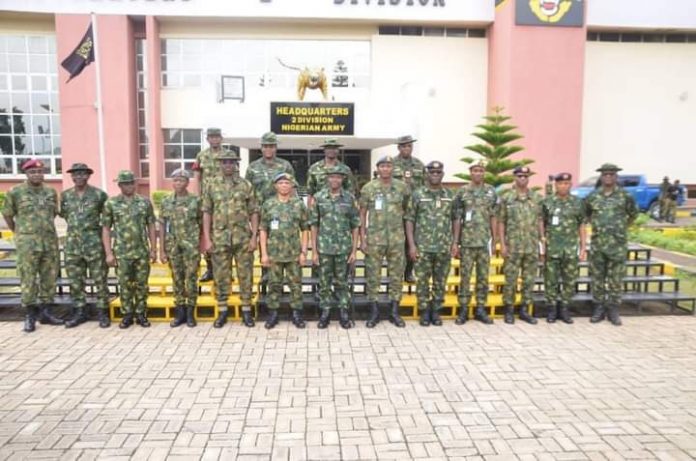 The General Officer Commanding (GOC), 2 Division Nigerian Army, Major General Aminu Chinade, has affirmed that the Nigerian Armed Forces will remain one indivisible institution that will continue to collaborate, cooperate, strategize and synergise in the defence of the territorial integrity of the country.

TheFact Daily, reports that the GOC while applauding the existing synergy and cooperation among the security agents in the Division’s Area of Responsibility, noted that everybody in the country looked up to the Armed Forces for security and peaceful environment, which therefore called for more jointness, cross information and the discharge of assigned duties with utmost responsibility.

Major General Chinade further pointed out that beyond the security challenges is the political activities that have kicked off in the county, which he said called for neutrality in all ramifications on the side of members of the Armed Forces.

While assuring the NAF Commander of continued assistance, the GOC enjoined Commanders at all levels to continuously educate their subordinates and wards on personal and environmental security.

Earlier, the Commander 671 Airforce Detachment, Air Commodore Babatunde Folaji, averred that the Detachment had and would continue to collaborate and synergise with other security agencies for a peaceful and security free environment in Oyo State.

Air Commodore Folaji expressed appreciation for the continued support and assistance enjoyed from the Division especially in the area of medical facilities, and wished the GOC a successful tour of duty.

Covid-19 Vaccination: None Died Out Of 6m Nigerians Vaccinated- FG