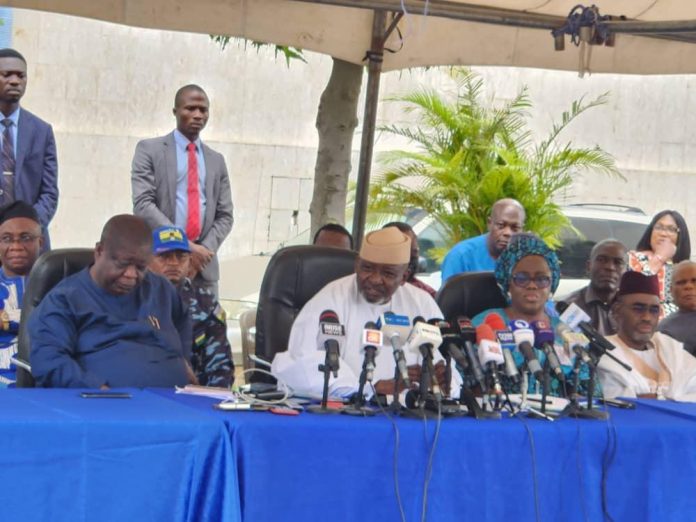 The Federal Government has insisted that no money was paid as ransom to secure the release of the 23 remaining Abuja- Kaduna train victims.

The Minister of Transportation, Engr Mu’azu Sambo stated this on Friday at a press briefing in Abuja.

He said,“It is not appropriate to reveal exactly what measures have been taken to secure the release of hostages of this nature.

“Now, there are two things I want you to bear in mind. Through this incident, it is the position of this government that under no circumstances should there be collateral damage.

“In other words, the military and security agencies that have been charged with the responsibility of securing the release of these hostages should not act in a way that will endanger the lives of the same hostages. In other words, make sure that no hostage life is lost in the process of securing their release.

“There is a committee made up of some retired generals and some retired public officers of high ranking and status who assisted the military and the security agencies throughout the process of securing the release of these hostages.

“I want to state categorically that because this government does not support and approve ransom payment, no kobo was paid in exchange for the release of these 23 hostages and other ones as well,” he said .

Engr Sambo while commenting on why the released victims were not present at the ministry’s headquarter said: “the intention was for them to be here today. They were treated and looked after and made sure that everybody’s health was in good condition.They were also given replacement clothing.

“Mr. President happened to be in Kaduna yesterday(Thursday)for the passing out parade. The Nigerian Defence Academy provided an opportunity for him to meet with the 23 that were released and after meeting them, they were reunited with their families.

” It became difficult to get them back together and bring them here but the last time we spoke with their coordinator, they said they have a plan to come to the ministry to appreciate the government through the ministry of transportation. Hopefully, they will come next week.”

On whether they would be rehabilitated or compensated, he said: “I honestly have no answer for the question.

He however, did not give a specific date when the service would commence.

According to the minister, ”rather than lose the life of a single Nigerian, we will rather stop the rail service. We could not resume with a clear conscience knowing the kind of trauma that both the victims and their loved ones were going through, we felt that it was not appropriate to resume rail services.

“Now, I can tell you, we are going to resume very soon. Now, to resume rail services, we have to put in place measures that will ensure that going forward such an incident never happens in this country. And so we have a short-term and a long-term plan.

“I am going to address the press specifically on this hopefully next week, mindful of the fact that when it comes to security matters, there are certain categories of people who do not mean well for other people to know exactly what you are doing.

“The short-term measures will be put in place very quickly to enable rail services to commence and beyond a period of three months, we will put in place a sustainable plan that will ensure that our rail lines are safe and secure and people can travel on them with their minds and hearts assured of safety.”

Giving details on rehabilitation plans, the Permanent Secretary of the Ministry, Dr. Magdalene Ajani said, the victims were free to access post-traumatic treatment.

She said: “The plans for post-traumatic rehabilitation of the victims and family members are on. They have an open link with the hospitals they were treated.

“For the 23, most of them are resident in Kaduna and for the ones that were released earlier, they have open access to the hospital for such care.”

“For the 23, most of them are resident in Kaduna and for the ones that were released earlier, they have open access to the hospital for such care.”