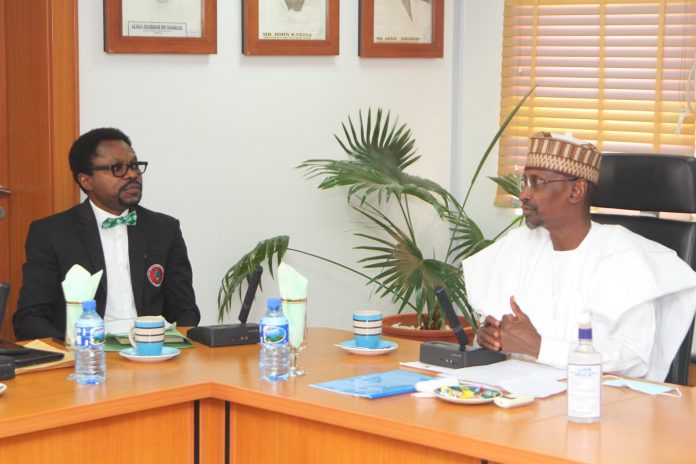 The FCT Minister, Malam Muhammad Musa Bello has said that the FCT Administration has no plans whatsoever to shut down the Garki Distnct Hospital, explaining that the 15 year concession agreement signed between the FCTA and the Nisa Medical Group on the management of the hospital expires on the 31st of March, 2022 after which the hospital reverts back to the FCTA to enable the Administration provide for more public hospital bed spaces.

Malam Bello stressed that contrary to rumours making the rounds, the FCTA has no plans to disrupt the operations of the hospital even for a single day following the expiration of the 15 year concession agreement.

The Minister who gave the assurance when he received the Executive members of the FCT branch of the Nigeria Medical Association (NMA) led by tts Chairman, Dr. Enema Job Amodu, on a courtesy visit to the FCTA, said the concession agreement had an expiration date as assented to by both parties.

In the words of the Honourable Minister: “The FCT Administration ts not terminating the Garki District Hospital Concession. Even our distinguished Chairman here said terminate, but it’ not so. The situation is that an agreement was entered 15 years ago and mutually accepted by the FCT Administration and the Nisa Medical Group. It was an agreement that has a commencement date and an expiration date”.

“So, by virtue of the agreement, it is supposed to expire on Thursday, 31st March 2022, a natural termination. So, its not the FCT terminating the agreement. That’s what we need to understand”.

Speaking further the Minister said, “The whole idea of PPP arrangement is very good. It was the first that was done and as a matter of fact, after that, we have done a couple of PPPs in infrastructure. Even within our existing hospitals, we are now working on a model where certain specialised departments would be run on PPP arrangement. The whole idea is to expand the hospital space, to expand the specialty space. So, we are not terminating anything. It’s an agreement that is going to lapse”.

A statement by the Chief Press Secretary, to the Minister, Anthony Ogunleye quoted the Minister as saying that the government has the responsibility to provide health care to residents of the FCT and shutting down the hospital will go contrary to that responsibility.

He said “So, how could we just shut our hospital, while we have been given a mandate to provide healthcare. So many people tell me that Garki hospital will be shut down, so many people will lose therr jobs, | just find it difficult to comprehend, quite frankly. How can a government just shut a hospital”?.

The Minister assured that FCTA officials and the Nisa Group would work on modalities moving forward adding that whatever arrangement was reached thereafter will be in the best interest of residents of the Territory and other patrons of the hospital outside the FCT.

He also assured that all medical professionals working or training at the hospital who wish to remain there were free to do so as the administration does not have any intention to disrupt any activity at the hospital.

Malam Bello used the occasion to commend the NMA for the support that the FCT Administration had always enjoyed from the body and its members.

Earlier, the leader of the delegation, Or Amodu expressed concern over FCTAs decision to terminate the concession agreement of the Garki District Hospital with NIA Medical Group. However, he noted that if for other reasons, the FCTA deems it fit not to renew the concession, with NISA Medical Group, the FCTA should consider the doctors and other health workers presently working in the hospital with a view to retaining their services and to complete their programmes such as residency training, internship etc.

While commending the Honourable Minister on achievements in infrastructural development in the FCT, Dr. Amodu reaffirmed NMA’‘s commitment in partnering with the FCTA and identifying with its goals and aspirations.